SIGforum
Carbine sling attachment locations
This topic can be found at:
https://sigforum.com/eve/forums/a/tpc/f/630601935/m/4660002094
davidjinks
Carbine sling attachment locations
I use a Vickers adjustable sling. Front sling mount is closest to chamber while the rear sling mount is attached to the stock on the right side mount.


When I need to sling the rifle for movement or climbing, it gets rotated to my back and the sling is cinched down.
KSGM
I was reminded of this thread the other day, when I was walking through the woods, moving branches out of my way, climbing up and down the banks of streams, helping a friend climb up the back of a stream, and swinging my arms on the last stretch of a long walk with wet feet. I was glad I had a sling! Regardless of how you attach the damn thing, to imply that you don't need one, or ought not use one is weird to me. Looking at you, Tirod. At the end of the day, it's a personal choice based on personal preference, like anything else; my preference is to have a strap on my rifle.
sigfreund
Long guns being used for serious purposes need slings for the same reasons that handguns being used for serious purposes need holsters: because it’s not possible to keep holding the gun in our hands all the time. One exercise I developed required officers to respond to an active shooter event and be unexpectedly faced with a threat about 25 yards away. After engaging that target they had to continue moving to deal with another. One officer who had no sling on his AR had an immediate malfunction with the carbine and had to switch to his handgun. His response to not being able to shoot the pistol with both hands while holding the carbine? Drop it on the ground and leave it behind(!) while moving on to the second scene.

Legal Beagle
(My experience is with the carbine as a patrol rifle vice as an infantryman and placement hasn't really changed in the way I was taught in the state academy and 15 years later in the way it's taught to federal agents today.)

We started out with a plain nylon sling very much like the old M14 sling, but attached to a loop of paracord on the FSB and carried weak side, muzzle down. Later on, we got Specter Raiders (https://www.spectergear.com/ProductDetails.asp?ProductCode=853) and finally ended up with an early VTAC version of the Blue Force Gear Sling (https://www.blueforcegear.com/vickers-sling). Both of these were attached to a side swivel mount.

I've carried all three slings in exactly the same place on a 16" carbine, evolving the attachment but always on the left hand /side/ of the FSB and not on the underside. (Specter has the best videos for this.)

On an 18" or 20" with an MLOK rail, my sling mounts are approximately on the same place as my carbine mounts would be (roughly halfway down the handguard, and left hand side vice the underside of the rifle).

I truly believe that after ammunition and magazines, a sling and light are the two most important items for any rifle. You can use them to improve accuracy, safely traverse obstacles, transition to a handgun, and reduce fatigue from carrying a rifle. One would think because of that, there would be a change in where the attachment for a sling would go.

QD mounts or sling attachments on the buttstock work for the rear, but it escapes all logic that standard front sight post/gas block come with a /underside/ sling mount instead of on the side.

For the front attachment, sideways is the best ways.

quote:
Originally posted by MikeinNC:
I keep mine near where they would be on a factory rifle….connection under the FSB and on the bottom of the stock

I use a hasty sling or military arm choking sling if prone…otherwise the rifle is slung over a shoulder while walking.

I don’t play rifle games and I don’t patrol the hood anymore. So mine are for hunting or target shooting. 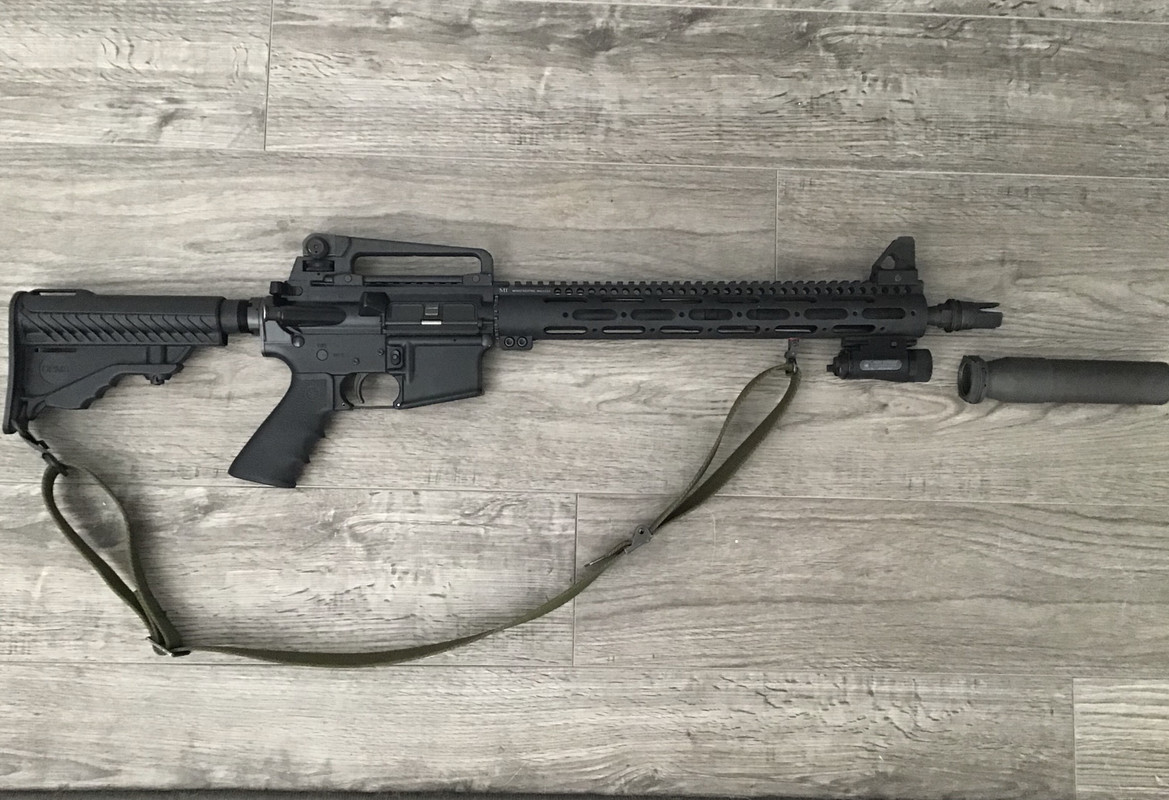 If you were willing to try something, would love to hear how it goes if you moved your FSB back, put your light on the top rail just in front of the FSB, and your sling swivel to the left side of your handguard. I think you would like it.