SIGforum
Sigforum "Postal Match"
This topic can be found at:
https://sigforum.com/eve/forums/a/tpc/f/451105858/m/1330080484
92fstech
Sigforum "Postal Match"
I like to shoot. Unfortunately, with my rotating work schedule, it's hard to stay involved in any local matches. I know with the stupidity over the past year, and the ammo situation, it's been tough for others to get out and shoot as well. I thought it might be fun if we did our own remote match here on Sigforum...just some simple, friendly competition to get us out to the range and shooting on a somewhat regular basis.

I'd like to keep it simple and practical. Low round counts to be sensitive to people's ammo budgets, and readily available targets that are printable off the internet so we can all shoot the same one. Types of guns can be limited (for example: carry guns, military rifles, bolt-actions, snubbies, rimfires, pocket guns etc.), but let's try to keep the categories pretty broad so that most can participate. If you don't have a gun that fits into the category of the match, go ahead and shoot something you do have that's close...this is all just for fun.

I don't care how many times you want to practice shooting the course, but for the sake of the competition, designate your "match target" before you shoot it and post your honest results (IE don't shoot 5 targets and then just post your best one...pick the one you're going to post and then shoot it). This whole thing is on the honor system, so be honest!

I propose we let each "match" run for 2 weeks to give people time to get to the range and post their targets, and then we score the entries. Winner gets bragging rights and gets to pick the course of fire for the next 2 weeks.

I'll start to kick things off. We'll keep it simple: Using your actual carry gun, whatever that might be, fire five rounds at an NRA B8 center (Printable version available here: https://targets4free.com/nra-b8-target/) from 7 yards.

When finished, score your target (if the grease ring breaks the line, points are awarded at the higher value), post a picture of your target, and say what you shot it with. Pics of the gun you used are also welcome, but not required.

If we have interest and get some participants, on the 24th we'll tally up the scores and the winner can pick the target and course of fire for the next match. Be safe and have fun!
RichardC
One handed or two handed?

Choice of printable targets: suggest black only, not everyone has color printer.

offgrid
Actual carry guns. This should be a balance between acceptable accuracy and speed not a slow fire bullseye contest?
Draw from concealment if able, two hand, time limit of 3.50? should not be too hard

Time divided by B8 score?
92fstech
Two handed, but you can shoot it one handed if you want. I don't care about the color target...they're both the same size. Feel free to use whichever one you want. As far as speed goes, I get where you're coming from and I agree, but some folks don't have access to range facilities that allow "rapid fire" or drawing from the holster, and I'm trying to keep this as accessible as possible....so at least for now on this first go around, no time limit. We can adapt that for future courses based on feedback from the group.
V-Tail

quote:
some folks don't have access to range facilities that allow "rapid fire" or drawing from the holster

Unless I'm missing something, there is no indoor range around here that will allow shooting faster than one round per second, and none that allow drawing from the holster, or even starting at low ready. The indoor ranges around here generally want you to pick the handgun up from the shelf in front of you, and fire at a very deliberate pace.

Some, but not all, of the outdoor facilities allow this type of shooting, but they are mostly private membership clubs.

Based on that, there are probably a good percentage of our folks who would not be able to participate in a timed event, nor in any match that involved drawing from the holster.


Any cocktail can be a shrimp cocktail if you put your mind to it, and if you carry lots of loose shrimp in your pocket.

quote:
Originally posted by V-Tail:
Based on that, there are probably a good percentage of our folks who would not be able to participate in a timed event, nor in any match that involved drawing from the holster.

Yeah, there’s nowhere near me where I can do such things. While it sounds like oodles of fun, things like drawing from the holster and time limits that require rapid fire means far fewer participants.

Hey offgrid, how about you do that and we’ll award you extra credit?


Hey offgrid, how about you do that and we’ll award you extra credit?

OK! Do I get to pick the next match then?

I'm very fortunate to have access to a private outdoor range, our land and friends land. Private outdoor range 15 minutes away can shoot 270 degrees on one of the bays, set up stuff, shoot around my vehicle.... Shot there today.
92fstech

quote:
OK! Do I get to pick the next match then?

I'm fortunate that my club doesn't really have many restrictions beyond what is reasonable for safety. I'd be all kinds of frustrated if they wouldn't let me draw or shoot fast. I suppose the public places have to make those rules because of the mag dump types, but unfortunately it negatively impacts lots of responsible shooters who want to train on practical skills.

I was going to try and get out and shoot the course today before work, but when I woke up my wife told me the roof was leaking, so I had to deal with that. Hopefully I can get out tomorrow to shoot it and post it up.
RichardC
After all, tomorrow is another day!

92fstech
Well here's my target. I'm kinda wishing I'd opted for something with tighter rings to make scoring easier (that 10-ring is BIG), but we can use X-Count. 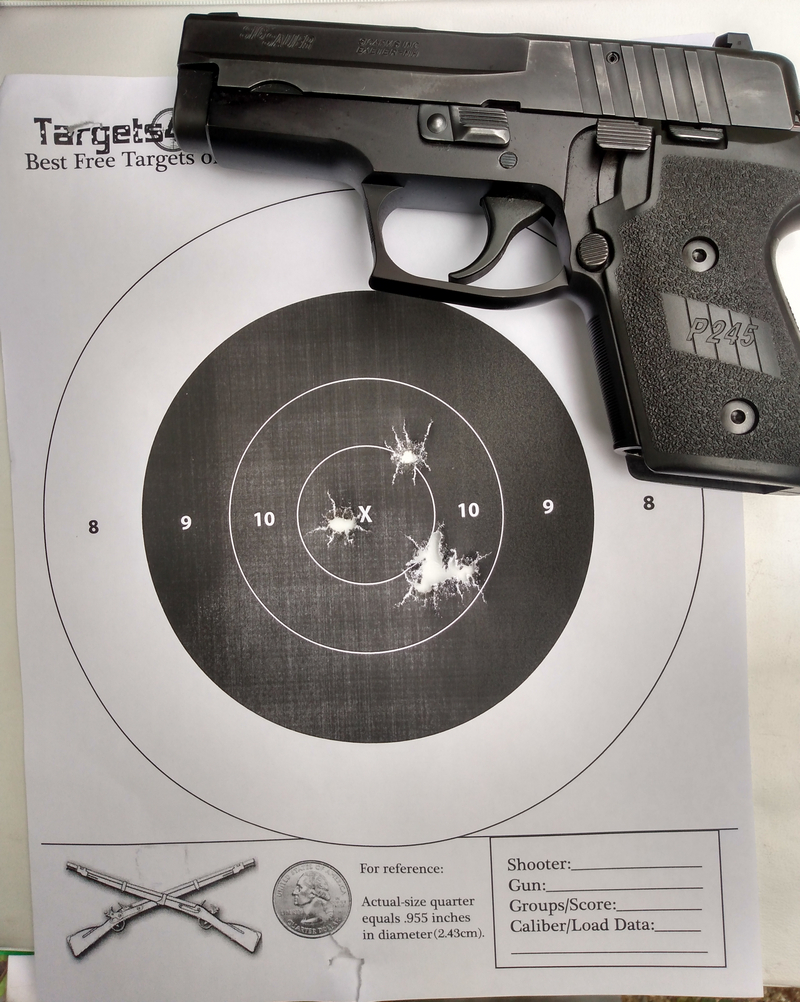 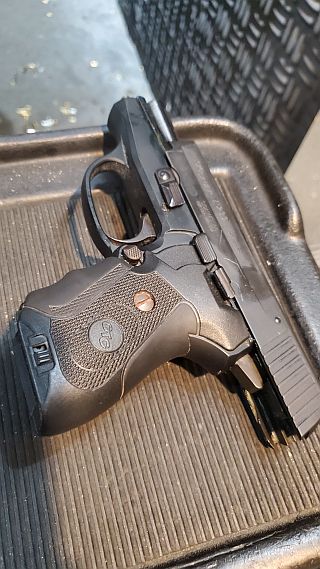 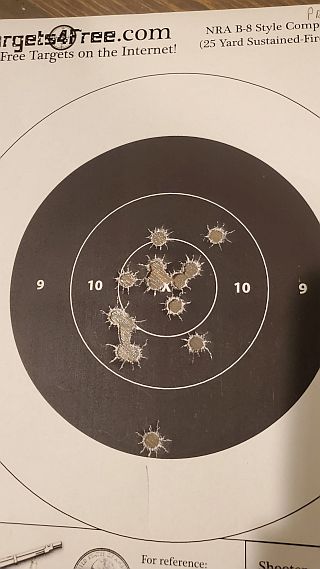 Here's my match target; I choked under match pressure 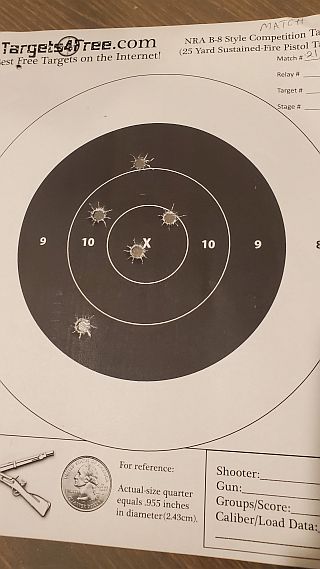 And just to see if it really was match pressure, I fired a subsequent target: 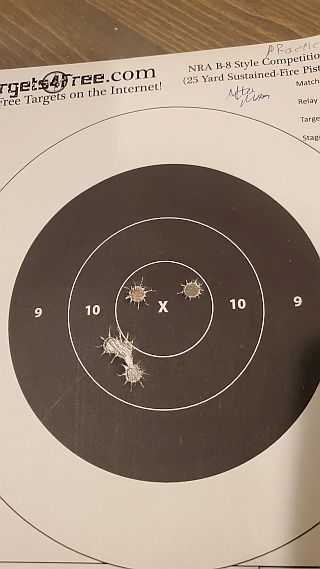 Excuses: There was a short barrel AR to my left and a .500 S&W Magnum even closer to my left. The sun was in my eyes. Tropical Storm Fred was off the left coast. Haiti had a 7.2 earthquake (God rest their souls).

92fstech
Nice! Another DA/SA single-stack P-Series. I like it!

I too did the warmup thing...shot two targets and committed to the third as my match target. The first practice target was the best...I should have just shot it cold out of the gate. The second was the worst, and #3 (which you see above) ended up between the two.
TheFrontRange
This is a great idea, methinks. I’m going to participate once I get a printer glitch resolved haha...

92fstech
Fix that printer and get to shooting

! The more shooters we get, the more fun this should be. If you can't fix the printer, and have access to some other form of B8 target, go ahead and shoot that...it should theoretically be the same size.
TheFrontRange
Well, indeed, you make a good point - I may be able to order some dang targets quicker than I can un-discombobulate the printer haha!

The indoor range I’m a member of does allow drawing from the holster on the line (only with range officer approval / annual “certification,” such as it is), so I’m looking forward to putting ye olde skills to the test!

offgrid
I'm not picking the next one!

5 draws from concealment, JM AIWB holster, t-shirt. About as good as I can shoot. Timer is the last shot.

92fstech
That's not bad shooting at all, especially from the holster under time! It's kind of hard to tell from your pic...3 10s and 2X? Or is it 3X?
TheFrontRange
Well, my targets have arrived, and I’ll be seeking range-time ahead of the end of the two-week run on this match - more to come!

92fstech
Excellent, looking forward to seeing your entry and what you're shooting it with...you always post nice gear!
offgrid

quote:
Originally posted by 92fstech:
That's not bad shooting at all, especially from the holster under time! It's kind of hard to tell from your pic...3 10s and 2X? Or is it 3X?