Pig size would typically be 300 lbs. max., normally under 200 lbs.
If new, probably something in stainless. But if used, a blued steel revolver would be satisfactory.

quote:
Originally posted by c1steve:
If you were pig hunting with a rifle, but wanted a sidearm revolver, what would you choose? Interested in something with manageable recoil where any follow up shots could be fast and reasonably accurate.

Pig size would typically be 300 lbs. max., normally under 200 lbs.
If new, probably something in stainless. But if used, a blued steel revolver would be satisfactory.

Lots of good possibilities but it hard to beat a Smith 686. Light enough to carry but heavy enough to be manageable with heavy 357 magnum loads.
bubbatime
A three inch K-frame in .357 magnum.

RogueJSK
.357 and .44 Magnum work well, and are common for hog hunting sidearms (or even long guns).

sigarms229
A .357 magnum with hard cast bullets should be sufficient.

Smith K or L frame guns would be on my list.

I was planning on using my Glock 20, but feel like being a tradionalist this time.
-----
I note there are no votes for Ruger, which I suspect is due to the rougher trigger, etc. 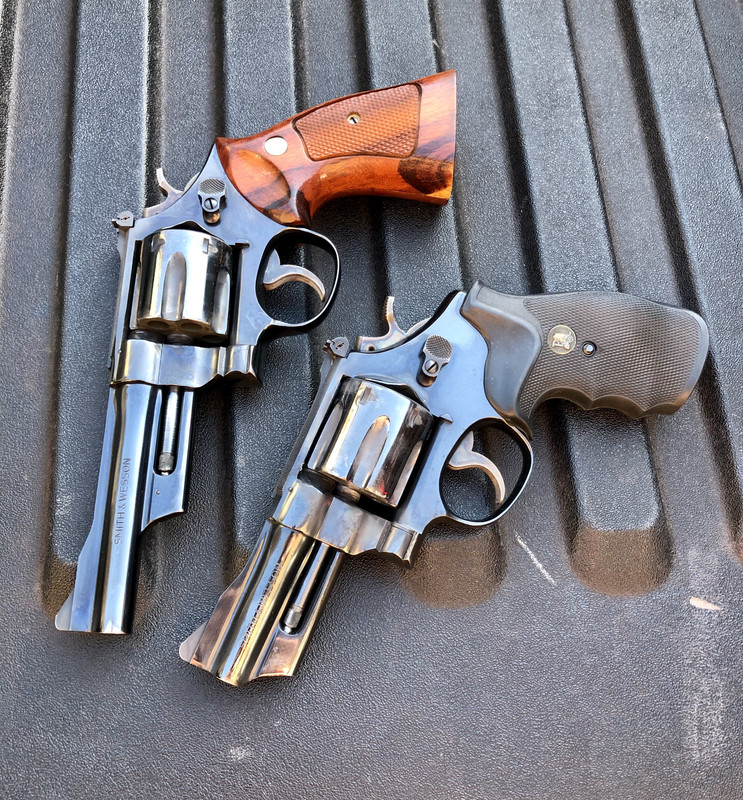 "The sea was angry that day, my friends - like an old man trying to send back soup in a deli." - George Costanza

Eeewwww, don't touch it!
Here, poke at it with this stick.

And for the Smiths, are older guns as good as newer ones? What vintage/years are best?

And for the Smiths, are older guns as good as newer ones? What vintage/years are best?

I’ll admit, I’m severely biased toward the pinned-and-recessed era of S&W revolvers, more out of tradition / history than anything else. That said, I’ve owned some of the newer breed of their guns and they were perfectly capable.

I chuckle a bit at myself here: for all my talk of “older” Smiths, the revolver that rides in a pocket holster with me daily is a 642 Airweight with the dreaded on-board lock haha. It has also been an exemplary gun.

As far as years go, I think the pinned barrels / recessed chambers were phased out by the early ‘80s or so. The two 27-2s that I posted above date to the early- to mid- 1970s, IIRC.

Edited to add one more caveat with yet another self-deprecating chuckle: I’m not a hunter haha! Given your scenario, though, and if I was headed afield as such, I’d still pick one of these 27s as a sidearm. I’d likely go with a 158-grain hollow point (assuming such ammo is “allowed” for hunting) or a jacketed soft-point in the same weight.This message has been edited. Last edited by: TheFrontRange,

roym
If it was me , I would just take my Smith & Wesson 2 3/4 inch model 69. But I reload and otherwise, if I didn't reload, I would try several factory loads to find the load that worked best for me. I think the 69 makes a good all around woods / hunting back-up for bow hunting too
p08
Magnum Research BFR in .30-30. Was with a guy who put 5 rounds from a 44 mag and the pig only went down after I gave him my AR.

abnmacv
If the handgun is a backup for inclose shooting a Glock 29SF (10mm) would work loaded with Underwood 200gr. Gun is small enough to be out of the way until you needed. Bonus when you pull the trigger it always goes bang.

4MUL8R
Ruger Alaskan. For me it points instinctively well. Underwood hard cast ammo. Your choice of caliber. 454 Casull hard to shoot. 480 Ruger easier to shoot. N.B. I have never been hunting for this game with the Alaskan, but have owned both calibers. I would look very carefully at the entirety of any Ruger revolver for machining quality.

Challer
For pigs? If it must be a revolver, 686 with appropriate ammo (not self defense ammo). For your back up, it’s better to ask what handgun would you hunt a pig with. In my case these are: 7.5 FK BRNO with F9 ammo, G40 10mm with CEB or Lehigh penetrators, G40 9x25 with same bullets as the 10.
taco68
My 3in SP101 is always with me when in the woods. And yes, I do have larger frame revolvers too, just like size and weight for carrying.

Blume9mm
I'm by no means an expert... but I lean toward the 357 or 44 with a solid bullet such as full metal jacket. I suspect the skull of those critters is hard and you want something that will punch through. Then again even penetrating the brain on a lot of primitive animals does not kill them immediately... I once had to put 5 rounds of 9mm in the head of a possum before it stopped moving.

wacopolumbo
Since you have a Glock 20, why not a 10MM wheel gun? Both Smith and Ruger have fine options.