SIGforum
Gas in the face on 55X weapons specifically
This topic can be found at:
https://sigforum.com/eve/forums/a/tpc/f/380105858/m/7110006384
KSGM
Gas in the face on 55X weapons specifically
Lately I have been working to reduce the emissions of a SG553. Latest step has been the application of an OSS HX-QD 556 silencer. Much to my dismay, I still can't fire more than ten somewhat rapid consecutive shots without having to damn-near shut my eyes to get relief from the gas sting. The OSS is certainly working as advertised, as the gun functions flawlessly on the normal gas setting, and runs very clean. The cleanliness and normal operation seems to rule-out gas coming back from the bore into the action, and exiting through the receiver seams. So, does the 553 just put out this much gas naturally? I honestly can't remember the last time I did any serious shooting with the gun without a silencer, so that is certainly the next step in my diagnosis efforts. Until I am able to investigate whether or not the gun behaves the same way unsuppressed, I can't help but remain puzzled as to why it's doing me this way! I have DI guns (with silencer-friendly mods) that run far better, in terms of gas-in-the-face, than this piston gun.

Does anyone else who shoots the 55X with a silencer experience these same problems? I am starting to wonder if it's just me, as in I react more severely to the gasses than most. Please note that it requires a string of at least ten shots in less than as many seconds for this problem to manifest. So, if you don't shoot yours under at least those circumstances, you likely wouldn't have noticed it.

Help me determine if I am a baby, or if the 553 is doomed to poor performance with a silencer!
PGT
The factory four-pos regulator with 0.9 suppressor setting is a must (or have a std drilled out for that). I run the Sig SRD556 direct mount can on one and it's less objectionable than a friend's full auto Dakota Tactical MP5-SD (you look like a coal miner after a few mag dumps) but as you can see in this video, it's still putting gas to the rear and also through the gas block vent. Should also caveat this by saying this gun was basically new and not cleaned/lubed and the can was brand new so burning off stuff. We got it glowing cherry red and it smoked for a LONG time lol.

55x guns are over-gassed for reliability so it does take a little tuning to get them to run nicely when suppressed.

I've got a few Dead Air cans I'm going to try but need to swap a mount on my other 553.

PGT
Another thing...ammo matters. Stuff like Hornady Black is optimized for short barreled rifles to ostensibly, it would work cleaner. I'll have to try some but obviously not range ammo.

Here are pics of my can from the video above, nice coloring after the heat cycling. By the way, Sig doesn't recommend running it on a 9" barrel but per an industry friend, it has an Inconel blast baffle before titanium baffles so will have no issues on semi-auto use. YMMV and all that. 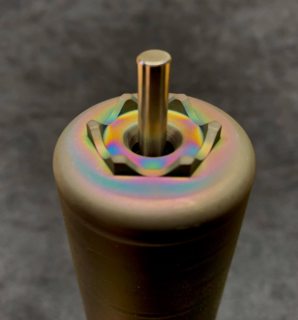 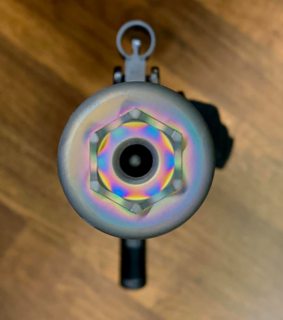 KSGM
The design of the OSS renders the 4-pos valve unnecessary. I know this because I have tried it, and the gun doesn't work. That being said, one can logically deduce that more gas is making it out the muzzle and away from me, yet my problem persists.

Was that you or your friend shooting in the video? If it was you, what did the gas feel like to you? If it was him, did he have anything to say about it? That looked to be a full mag, or close to it. Firing rate is almost identical to my circumstances, and round count is higher. I guarantee, if that was me behind your gun, I'd have my eyes damn near shut less than halfway through that string of fire.

I think my next move is some RTV on the mating surfaces at the back of the receiver. It certainly can't hurt to try it.

Where silencers on short barrels are concerned, I don't much care what the manufacturers say. I accept that short barrels are going to decrease the lifespan of virtually any silencer. All the guns I shoot regularly are 11.5 or shorter. I have an AAC M4-2000 whose blast baffle shows pretty significant erosion, to the point of the ID being probably what you'd see in a .30cal silencer. It still works just fine. Sounds like you more-or-less agree with that sentiment, and I applaud you.
PGT
"send it!" LOL

That's me shooting. It was not at all objectionable...less so than the MP5SD with B&T can on it. That one gasses me terribly. I don't mind this 553 at all.

The point of the regulator is to pass less gas to the recoil system of course which means it goes out the front. So, it's hard to have less gas to the face than no can mounted at all so even low back-pressure cans like DA or OSS...the 55x system is purposefully over-gassed.

I've posted the regulator chart from SAN/SIG before and you can see the port size is very barrel length, caliber and ammunition specific. If you don't have it, let me know and I'll find and post.
KSGM
I have the chart you're referencing, and I understand what you're saying. One thing I have noticed when shooting with silencers is, regardless of what kind of gas regulation you have, there is still more blowback into the receiver from the bore, when the action opens. A silencer doesn't behave like the same amount of added length in barrel, in regards to valve port sizes or bore gas behavior. The space it occupies is where the similarities end.

I used to agree with the idea that the 55X guns are "over-gassed" but, nowadays, I don't know that they really are. Not in the sense that you can reduce the gas applied, and make it "better". I think it is a symbiotic violence in the design. To change one part, you'd need to change another. A reduction in gas would require a change of a recoil spring, or a lightening of the reciprocating components.
PGT
US made guns absolutely are over-gassed (since I have several and have compared). I think Swiss guns are more properly balanced with respect to recoil impulse and reliability.

I have a 551-SB and a spare 17" barrel for it I want to swap on. The chart shows a different regulator for that extra 3 inches of barrel length. I'll have to see how it runs after swapping the barrel
KSGM
I reckon I agree with you on the US guns. I made that comment in the scope of Swiss guns, and the chart you had mentioned, which depicts Swiss stats.

You will certainly need a different valve for a 551SB to LB conversion. The 553LB uses a different valve than the 553 as well which, unfortunately, renders the SAN 4-pos valve incorrect in a 553LB. The 0.9mm port was passable for use with a silencer, but the other settings were not correct for unsuppressed firing.
KSGM
Overall, I guess this topic is too subjective. How gas feels to one person can't be measured and compared to how it feels to someone else. My ultimate (perhaps unattainable) goal is to work out a gun (AR or 55X) that is just as pleasant to shoot with a can as without. Wish me luck. If I can't do it, I am at least gonna get as close as I can.
KSGM
Another interesting note on the suppressed 55X (and other piston guns) is the gas cloud, which is ideally being pushed away from the shooter, can impede visibility in a pretty big way when using NVGs. So, regardless of whether I achieve my goal, the gun will not be ideally suited for nighttime use anyway, which sucks.
KSGM
Well, I figured out the problem, in my particular circumstance.

The more I shot, the more I was of the opinion that the gas I was getting in my face with the OSS HXQD was MORE significant than with my previously applied HALO. But, other observations indicated that the OSS was working as advertised: the gun was clean, ran good on the regular gas setting, and actually didn't work on the "suppressed" setting. Obviously there was less gas effect on the system.

So, I began to think about anything else that may have changed since I last shot with the HALO. There was one other thing and, sure as shit, it was the problem. The friggen HANDGUARD.

Between the last time I shot with the HALO and the first time I shot with the OSS, I installed a quad-rail handguard, because I wanted to be able to mount an IR aiming laser, in an effort to start using the 553 in night practice. Turns-out that this damn thing deflects the gas right back you. The plastic doesn't.

I have never been a fan of the quad rail in general, as I have discussed in another thread, and I know at least PGT agrees with me. Well, add another strike against it.

If you're shooting with a can, stay away from the quad.

I suppose you could choke the gas down, to reduce exhaust once the piston clears the ports in the gas tube, but then you're just adding back the bore gasses and filth I've been trying to reduce. So, for me, the quad goes back in the parts drawer, and the 553 stays off night duty.
PGT
Interesting. Perhaps it's venting back through the op-rod tube and out of those holes and right up given the quad rail is open?
KSGM
That's what I figure.
nhracecraft

That's me shooting. It was not at all objectionable...less so than the MP5SD with B&T can on it. That one gasses me terribly. I don't mind this 553 at all.

The point of the regulator is to pass less gas to the recoil system of course which means it goes out the front. So, it's hard to have less gas to the face than no can mounted at all so even low back-pressure cans like DA or OSS...the 55x system is purposefully over-gassed.

I've posted the regulator chart from SAN/SIG before and you can see the port size is very barrel length, caliber and ammunition specific. If you don't have it, let me know and I'll find and post.

PGT - Can you post the Regulator Chart you're referring to? I'm definitely interested in seeing it, and I may not be the only one.

PGT
Here you go. The list gives you the rifle down the left, the Artikle (part) number for the proper regulator for optimal use for the ammunition listed.

"Borhung" = bore or regulator hole size in mm (i.e. 1.3 = 1.3mm). A dash means only a two-pos regulator works or that the listed part number is only two position.
DIN-Nr = Deutsche Industrie Norm-Number. DIN is the German standard for measurement or part type like SAE is for the US.
Kunde = customer
gravierung = engraving (ja=yes/nein=no)