__________________________
The entire reason for the Second Amendment is not for hunting, it’s not for target shooting … it’s there so that you and I can protect our homes and our children and and our families and our lives. And it’s also there as fundamental check on government tyranny. Sen Ted Cruz

quote:
Originally posted by Krazeehorse:
It wasn't Trump. It was his puppeteers.

Who are Trump’s puppeteers?

quote:
Originally posted by Krazeehorse:
It wasn't Trump. It was his puppeteers.

Come again??? What exactly do you mean?

"the meaning of life, is to give life meaning" ✡ I could explain it to you, but I can't understand it for you.

bozman
He meant it wasn't Trump that forced him out of the basement, it was Buyden's puppeteers...

SIG228
Interesting dynamics going on. Dems have been pushing early voting and it seems to be favoring President Trump. They've scared their base into thinking they're going to die if they go outside so I don't see a huge push of in person voting. Hopefully it's a bloodbath come Tuesday.
bigdeal

quote:
Originally posted by Shaql:
Good lord! This guy is my hero!

Wow! You see how fast ole Slo Joe withdrew from that verbal attack. The man is not only in mentally decline, he's afraid of his own shadow. Great attributes for a president of the US.

quote:
Originally posted by SIG228:
Interesting dynamics going on. Dems have been pushing early voting and it seems to be favoring President Trump. They've scared their base into thinking they're going to die if they go outside so I don't see a huge push of in person voting. Hopefully it's a bloodbath come Tuesday.

If you look at press reports over the last week, the Biden campaign has started telling people to vote in person or use one of their special little 'drop boxes' because it's too close to Election Day to assume mailed-in ballots will make it on time. I think we're seeing them decide, generally, that mail-in ballots can't possibly do it alone. Personally, I'm waiting for a series of "Vote!" memes that recall the Soviet defense of St. Petersburg during WWII because they've convinced their voters (especially those aged 60+, who seem to be the most rabid these days) that voting in person is a suicide mission.
Tn226
He's certainly not shy about a bit of pandering. Maybe smacks of desperation?

crowd at end of rally 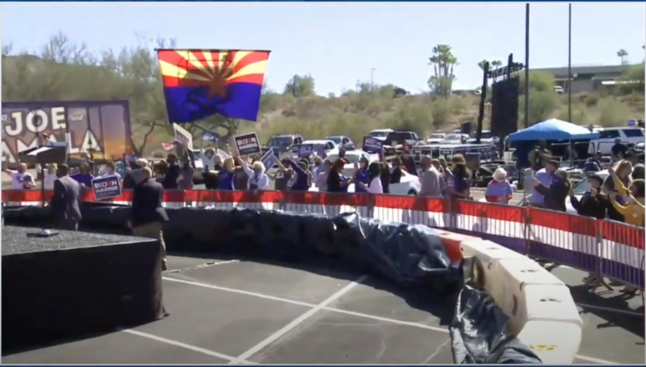 I talked to two folks yesterday that were at Trump's Tucson Rally last week. They said there were from 18-20K people there, and a LOT that couldn't get into it!!
SIG228
The Biden Campaign just confirmed Joe will appear in four states tomorrow: Confusion, Panic, Denial, and Catatonic.
Boss1
Its highly unlikely folks don't have an idea which way the wind is blowing for voters based on the millions who have already cast their ballots. After the lengths they've sunk to, does anyone doubt it?

If ol' Sleepy is out wandering about in anything besides his pj's, its likely because they know they're losing. If they had a big lead, they wouldn't risk more public vapor locks...


A real life Sisyphus...
"It's not the critic who counts..." TR
Exodus 23.2: Do not follow the crowd in doing wrong...
Despite some people's claims to the contrary, 5 lbs. is actually different than 12 lbs.
It's never simple/easy.

UPS Senior Public Relations Manager Matthew O’Connor told Business Insider on Thursday afternoon that the documents are located and are being sent to Carlson.

“After an extensive search, we have found the contents of the package and are arranging for its return,” he said in a statement. “UPS will always focus first on our customers, and will never stop working to solve issues and make things right. We work hard to ensure every package is delivered, including essential goods, precious family belongings and critical healthcare.”

It came after Glenn Zaccara, UPS’s corporate media relations director, confirmed Carlson used the company to ship the materials before they were lost. “The package was reported with missing contents as it moved within our network,” Zaccara said before they were located. “UPS is conducting an urgent investigation.”

During his Wednesday night broadcast, Carlson said that a UPS employee notified them that their package “was open and empty … apparently, it had been opened.”

“The Biden documents never arrived in Los Angeles. Tuesday morning we received word from our shipping company that our package had been opened and the contents were missing,” Carlson also remarked. “The documents had disappeared.”

On Tuesday night, Carlson interviewed former Hunter Biden associate Tony Bobulinski, who claimed that the former Democratic vice president could be compromised by the Chinese Communist Party due to Hunter and brother James Biden’s business dealings in the country.

Joe Biden has not responded to Bobulinski’s allegations. Last week during his debate with President Donald Trump, he said he had “not taken a penny from any foreign source ever in my life.”

Biden’s campaign earlier this month said Biden never had a meeting with an executive at a shady Ukrainian gas company, Burisma Holdings, while he was the vice president and his son sat on the board of the firm. A report from the New York Post, citing alleged Hunter Biden emails, suggested Hunter Biden had arranged a meeting between him, the executive, and Joe Biden.

It’s now possible that a special counsel will investigate Joe Biden should he win the presidency.

“You know, I am not a big fan of special counsels, but if Joe Biden wins the presidency, I don’t see how you avoid one,” Senate Homeland Security Chairman Ron Johnson (R-Wisc.) said. “Otherwise, this is going to be, you know, tucked away, and we will never know what happened. All this evidence is going to be buried.”

UPS did not provide further details about the apparent mishap.

I mean, Occam's Razor certainly could apply, and mere incompetence could be at play (why ELSE would they ship and NOT hand-carry such important documents? It would be like somebody UPS'ing the Zapruder Film after JFK was shot).

The whole "we lost it" and then "Oh, we found it" stuff sounds contrived. It's a great (if unethical) way to produce 'buzz' about a particular topic, as well as generate free advertising for UPS. I mean, we are all discussing these documents now. . .

.
Shaql
Do you really think UPS wants to sully their reputation for a publicity stunt?

quote:
Originally posted by Shaql:
Do you really think UPS wants to sully their reputation for a publicity stunt?

I recall clearly that it has been pointed out here, “Yes, there really is such a thing as bad publicity.” And who would be impressed or gratified by the fact that the contents were found? Cripes, I wouldn’t be the least bit surprised if ANTIFA and the rest of the Communists started demonstrating and burning down UPS facilities because someone in the company didn’t just make sure the contents quietly disappeared for good.

What happened was odd, but I am pretty sure that some of the speculation here will ultimately end up in the “Spectacularly Wrong” file—as so much other baseless speculation has over the years.

After obama asked Biden to be his 2008 running mate:

“So I got off the train, went home, true story. And we sat down the back and I had my deceased son Beau, who was then the Attorney General of the state of Delaware. And I had my son. Hunter, is the smartest guy I know ,” he said. “My daughter who is a social worker. And my and the whole family was there. And we sat in the back porch ..."

Hunter the drug addict. Hunter the n-dimensional sex hound. Hunter the hub of hundreds of millions of dollars of secret foreign deals to support the entire Biden family.

BTW, where is the smartest guy that Joe Biden knows ?
highroundcount
As I go back and watch videos of sleepy joe losing his shit and challenging people to contests I can't help but think of these guys: