Liberal filmmaker Michael Moore is calling for the Second Amendment to be repealed and sharing his theory for how to successfully remove "nearly every gun from civilian ownership."

"We need to start a movement to repeal the Second Amendment and replace it with something that says it’s not about the right of somebody to own a gun, it’s the right of all of us to be protected from gun violence," Moore said Friday on his podcast.

"We have a right to live," he said. "If you’re afraid of somebody breaking in, get a dog… you don't need a gun."

Moore began the latest installment of his "Rumble" podcast by reminding listeners that he appeared on MSNBC and urged the media to call for an end to the Second Amendment the night of the mass school shooting in Uvalde, Texas. He said he stayed away from speaking out after mass shootings for a decade because his 2002 documentary "Bowling for Columbine" made him everyone’s go-to voice to speak out after school shootings, and he didn’t want such appearances to become the new normal.

He decided to join MSNBC following the Uvalde massacre because "making a film that I thought would end this didn’t work" and staying off TV wasn’t forcing change, either.

"I thought, I have to be completely honest with people, and so I said it, I said something that I know the Democratic Party leaders and others don’t want, they don’t want this said, but I believe a majority of Americans are thinking it, a lot of people are afraid to say it. I’m going to say it," Moore said. "I said it that night, live on television."

Indeed, on May 25 Moore joined MSNBC’s Chris Hayes and demanded "drastic action" from Congress, including a moratorium on buying firearms. The liberal filmmaker then took it a step further by asking, ‘Who will say on this network or any other network in the next few days, ‘It’s time to repeal the Second Amendment?’"

Moore told "Rumble" listeners he wanted to speak to them directly about the remark because he plans to repeat the controversial talking point. He repeatedly said powerful Democrats are scared such rhetoric could cost them elections, but he doesn’t care what politicians think of him.

"I make no apologies for it because I understand the history of this country and I don’t think we should be afraid to say this. Repeal the Second Amendment," Moore said.

"They’re worried," Moore said of Republicans. "See, I’m not out on some left-wing here, I’m in the mainstream of American thought and opinion."

Moore then read a "new Second Amendment" that he wrote and proposed it to serve as the "general idea" for a replacement, which included a buyback program that would remove all civilian guns within five years.

"Congress shall have a well-regulated system for the extremely limited ownership of firearms and weapons, and they will make laws regarding ammunition, capacity, storage, locks, registration, the vetting of the owner, strict minimum-age requirements, all of which are necessary to the security of a free state and the right of the people to be kept safe from gun violence," Moore said. "The people’s right to not be shot, or threatened, by those who bear arms shall not be infringed."


"No matter where you go - there you are"

konata88
What a fucking idiot. He doesn’t know jack shit. He’s not smarter than a fifth grader. And with our educational system, that’s saying something.

"Those who would give up essential Liberty, to purchase a little temporary Safety, deserve neither Liberty nor Safety." - B.Franklin
"Wrong does not cease to be wrong because the majority share in it." L.Tolstoy

Rightwire
I'm not taking a bit of advice from that Hollywood communist.

Its better to be Pavlov's dog than Schrodinger's cat

There are three types of mistakes; Those you learn from, those you suffer from, and those you don't survive.

But at least he is honest about what he wants.

And he has set himself an unachievable goal, so he'll die disappointed.

Marlin Fan
This individual should not be allowed to say anything since nothing makes sense. Unfortunately, many people listen to this ass.
drtenb330
If he chooses not to have a gun or a right to defend himself, it's his (very poor) choice. But weapons have been carried since the beginning of time. What a pretentious asshole to speak on behalf of anyone else other than his moronic self
divil
The guy has in the past opined for less restrictive gun control. Something along the line of assault weapons verboten but fudd guns ok. Now Moore wants another sojourn in the spotlight so he parrots this garbage as a means to achieve that want. Moore is a shameless attention seeker who thinks he is quite the sage.
KevinCW
I support his idea. Imagine what we could do if they were dumb enough to call for a constitutional convention to propose/ratify amendments...

That would be the absolute DUMBEST thing they could do.


Strive to live your life so when you wake up in the morning and your feet hit the floor, the devil says "Oh crap, he's up."

quote:
by Michael Moore:
"you don't need a gun." 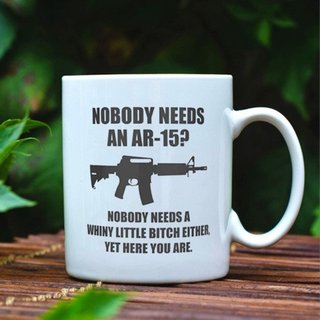 Actors, athletes, and celebrities are surely entitled to their opinions. They're not entitled, however, to use those opinions to dictate others' actions.