SIGforum
9mm AR Pistols - Colt Stick Mag Versions
This topic can be found at:
http://sigforum.com/eve/forums/a/tpc/f/630601935/m/5320005354
GrumpyBiker
9mm AR Pistols - Colt Stick Mag Versions
I’d been waiting for almost a year for PSA to get their 9mm Colt stick mag lowers back in stock.
Monday I got the e-mail and placed my order.
Then chatted with one of their reps about what upper was recommended (Gen 4 BTW) .
So I’m now at the place where I’m waning to begin to decide on barrel length & configurations.
What would the SF members offer as advice on barrel length?
4”, 8”, 10.5”?? Pros ~ Cons ?
Any horror stories of items used that didn’t workout?
I’ve heard that thin 5” free float M-Lok & Keymod rails on 4” barrels using a flash can prevent accessories being mounted due to the lack of clearance.

I plan to use this as a PD gun during travels in the motorhome. So accessories I’m interested in will be along that line.
I seem to be leaning towards the 8” barrel but I have no love or hate for the others.
This is my first 9mm AR pistol.
Also I went with the Colt mag style simply because I don’t care for the looks of the Glock mag AR configuration. Nothing more than that.

Sourkraut
I have a 9mm SBR with an 8.5” barrel and a can. If you are going to add a can, I would go less than 8” so your OAL remains relatively short. I wish mine was shorter. If you’re not going suppressed, I would go with an 8” barrel and flash hider. Makes for good balance in a pistol. These are my opinions, and others may suggest otherwise. Seems like the new offerings for complete pistols are going really short. Check CMMG and Sig for example.

Black92LX
I went with an 8” barrel and have it suppressed most of the time and have a mini flash can when not suppressed.
I think the length is just right.

ArtieS
I have read that 10.5 is the best compromise for velocity and compactness. I have a 16 and want to build a 10.5.

"All the citizens of this land are of right freemen; they owe no allegiance to any class and should recognize no task-masters. Under the chart of their liberties, under the law of high heaven, they are free and without shackles on their limbs nor mortgages upon the fruits of their brain or muscles; they bow down before no prince, potentate, or sovereign, nor kiss the royal robes of any crowned head; they render homage only to their God and should pay tribute only to their Government. Such at least is the spirit of our institutions, the character of our written national compact."

Charles Triplett O’Ferrall of Virginia - In Congress, May 1, 1888

hrcjon
I wouldn't say that for 9mm. The difference between 10 and 8 is miniscule. like <2% and depending on ammo way less than that.
I have a 5" mpx and cmmg and both are too short unless they have a suppressor on them.
The best compromise for me is 8".
might move this to pistol section.

dryw13
Agree with the majority so far - I have an 8” cmmg guard I built from their kit and sbr’d And it’s about perfect with my obsidian 45 in the short configuration. Bonus is that my 135 reloads I use in my pistols stay subsonic almost 100% for when I don’t feel like loading up 160 grainers
RHINOWSO
Check out 'Ballistics by the Inch'. When shooting 124/147 rounds, after 5" you only gain 20-30 FPS.

Not to mention, if you are thinking 9MM AR, you should be thinking SUPPRESSED & QUIET, so velocity is not something you really want.

Word of warning, my PSA lowers were picky about uppers. Aero lined up great, but I had to force the pins in on a Rainoer slick side I bought for the 9mm build. I will likely swap it out with another Aero and use it for a rimfire build.

GrumpyBiker
Would it be worth it to build two uppers.
The 8” barreled one to start with as I don’t have a can.
Then another one , a 4” barrel and suppressor with a 7-9” handguard, this Fall when I buy my can?

quote:
Originally posted by GrumpyBiker:
Would it be worth it to build two uppers.
The 8” barreled one to start with as I don’t have a can.
Then another one , a 4” barrel and suppressor with a 7-9” handguard, this Fall when I buy my can?

That’s one way to go. You’re the only one who can decide the worth. You may wind up sticking with the 8”. It’s just personal preference really.

gearhounds
I have the 4" version with the KAK can and wish I had spent a little more for the 8" barrel, simply for the increase in velocity (about 100 fps on average). The reason I jumped when I did was because it was $50 less than normal and had a SB SOB instead of the usually offered Shockwave. The Shockwave is fine but the SOB is superior.

The KAK brings it right to the end of the handguard so really, nothing is gained with the 4" model. I don't plan on adding a suppressor so I can't address that. It's a fun little gun. 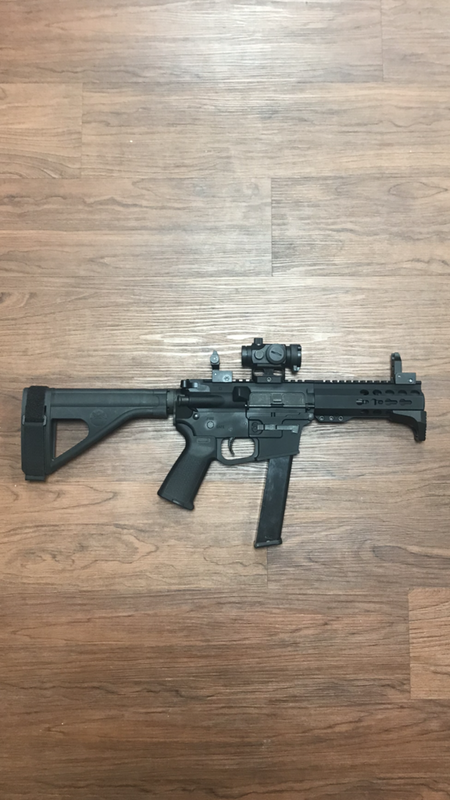 MKUltra
Go as short as possible. If you figure you get adequate velocity out of "normal" pistol why do you need 8"+ of barrel for an AR? My favorite barrel is 3" long from Brownells with a close second being my 5" TROS 3 lug.

hrcjon
Uh. well there is that issue of where to put your hands on the forened. or maybe a light.
No suppressor go 8".

Merc50
Thanks for the heads-up on this, GB, you have now motivated me to jump into another AR build project, LOL.

I have been looking at 9mm PCC options for the past year or so, and my considered options range from AR 9 to Scorpion to MPX to Tavor. A business acquaintance an hour south of me has a Scorpion and a 5.56 SAR Tavor, and has offered to bring them up when the weather warms up so I can try both. I checked out the Tavor X95 at SHOT this year, and as much as I think that would be a great option, I'm not ready to spend that much on a PCC, knowing that I would spend more $$ on upgrades, optic, etc.

I already have a 10.5" SBR in 300 Blk, which I use with my Griffin Rev 45 suppressor. The overall length isn't bad for a range gun, but it would be more challenging in tight confines, around corners, etc. I will be looking at 8" or less barrel length options when I get an upper for this PSA AR 9. I also have a spare Romeo 5 that I will probably install as well.
GrumpyBiker
Better ask this, while I’ve signed up for e-mail reminders when the PSA gen 4 uppers come back in stock, what other 9mm uppers work best with the PSA Colt mag style 9mm lowers?
For those who have them.
I’m looking for the Aero Precision uppers but I’m not finding them in stock at the on line shops I frequent.
Are there any other manufacturers that work well ?

RHINOWSO
YHM does 9MM uppers, mine has been 100% on a DDLES lower Colt pattern, just north of 1K through it.
PGT
I did a 3.5" barrel on mine and mounted a 3-lug adapter for my TiRant45
GoldieMI

quote:
Are there any other manufacturers that work well ?

I like the one that Rudy built at Macon Armory. He does 9mm blowback uppers and 45acp blowback or DI uppers as well. I have one of each
hrcjon
if the PSA are picky, time to get something else.

quote:
Originally posted by hrcjon:
Uh. well there is that issue of where to put your hands on the forened. or maybe a light.
No suppressor go 8".

Its a pistol. Your'e holding it out straight with one arm using your arm brace.

OK. I'm done being silly. Nobody actually does that.

My second favorite is my 5" TROS barrel. On the bottom with a PSA Colt lower and AAC quick detach 3 lug blackout flash suppressor.