SIGforum
Joined the 45-70 movement
This topic can be found at:
http://sigforum.com/eve/forums/a/tpc/f/630601935/m/3410002944
Tommydogg
Joined the 45-70 movement
I picked up a Marlin GBL 45-70 last week! The first order of business was to mount a XS Rail with peep sights on it. I took it to the range Saturday and hit a 12 inch paper target circle at 100 yards. I had the larger of the two included rear peeps on it. I think I need to shift to the smaller rear peep. I'm defiantly going to put glass on it. I was expecting a whole lot more recoil. This thing is like a kitten drinking a bowl of warm milk! I love the grain of the laminate! I think Marlin QC has greatly improved! Add this to my recently aqquired CSBL that operated flawlessly so far!

Texas Bob C.
A 45-70 takes the worry out of being close.
Gustofer

quote:
Originally posted by Tommydogg:
I was expecting a whole lot more recoil. This thing is like a kitten drinking a bowl of warm milk!

I concur with both of mine (Marlin and Sharps), but then I tend to load them a bit soft.

I have shot 45-70s that damned near separated my shoulder though.

Hot loads ain't no fun. And, IMO, when you're throwing a 500gr hunk of lead out there, there's really no point in loading them that hot. You can load them pretty much as soft as you want and they'll still stop a truck...as long as you know where they're going to hit.

"How dreadful are the curses which Mohammedanism lays on its votaries! Besides the fanatical frenzy, which is as dangerous in a man as hydrophobia in a dog, there is this fearful fatalistic apathy." Winston Churchill

sourdough44
Looks great, cool round with a lot of history.
gearhounds
Welcome to the shoulder mounted artillery

Most factory loads are loaded at fairly benign levels so as not damage old guns not up to the challenge of the more robust limits your new Marlin is capable of handling. There is no need to hand load to full performance, but it’s nice to know that you could depend on it to take pretty much any game on the planet if needed.

Here is my modified 1895G- due to some issues from the factory that Remarlington wouldn't admit or address, I had it chopped and threaded to accept a permanently attached brake at an overall barrel length of 16.25". The finish is Gunkote matte black, and is topped by an XS Systems Leverrail that has a Leupold scout scope.

This message has been edited. Last edited by: gearhounds,

sybo
Welcome to the “mild to wild” lever love!!!!!!! I love my “ All-weather” Henry in that wonderful caliber!! I love having glass on mine. Stretch out her legs! It’s really a GREAT round.
BB61
I have a JM Marlin SBL. Shooting HSM hard cast +P Bear Loads is quite the experience.


tacfoley
I shot my High Wall with a selection of loads, depending on the need. Since I don't hunt, it's for target use only.

One good plinking load is 27gr of 4895 under a 405gr flat-nose lead bullet. One good target load - out to 600 yards, is the same bullet over a lot more of the same powder. One you can shoot all day, the other I find that 20 with three sighters is enough, especially with that crescent butt and shooting prone or sat down shooting off sticks.
Sig209
basically a shoulder mounted mortar

bendable
for those florida moose

Bigboreshooter
I've owned both the standard and G model Marlins in 45-70. I found I much preferred the G, it is just so "handy". It's also a beast in the woods. 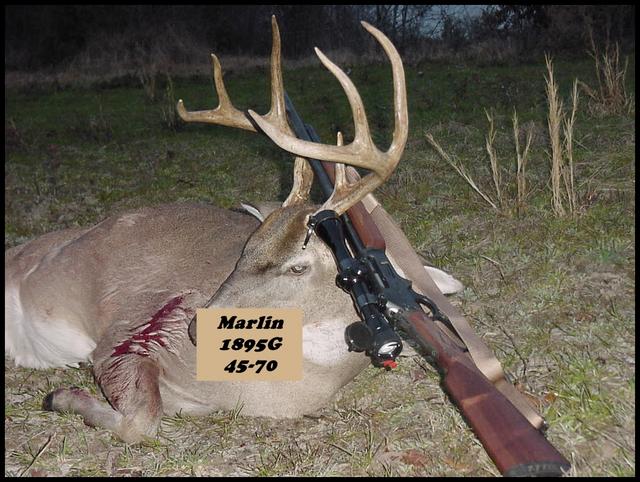 
Bigboreshooter
Speaking of 45-70, I found this article several years ago where the hunter killed TWO cape buffalo with one shot from his Marlin. 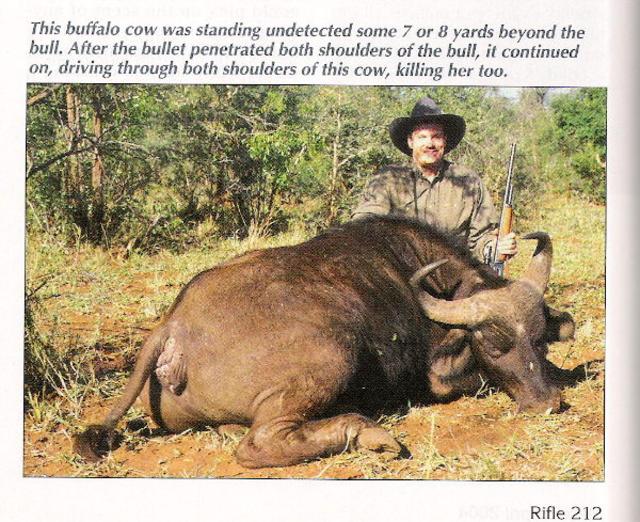 
arcwelder
A lever in 45-70 is something everyone should own.

There is little, you can't kill with the round.

Hornady makes some very aggressive readily available ammo, but even "basic" 45-70 is capable.

Is a lever action slow to load and cycle? Sure, in modern terms. But then, after your first shot, anything that can still run, will be reconsidering.

"Like a bitter weed, I'm a bad seed"- Johnny Cash

and then later I sold my Marlin to someone here on the Forum...wish I hadn't done that. (cant remember who, but he's a lucky guy)


TheFrontRange
A levergun in .45-70, particularly in a handy carbine length, is one of those guns I don’t seem to have a practical use for but that I want just the same. I love threads like this one!

quote:
Originally posted by TheFrontRange:
A levergun in .45-70, particularly in a handy carbine length, is one of those guns I don’t seem to have a practical use for but that I want just the same. I love threads like this one!

I take mine camping. It makes a good everything round. As Arc said, one round of 45-70 gets everyone’s attention. One of these days, I’m going to buy a couple of boxes of these: http://www.grizzlycartridge.co...rodshow&ref=GC4570PP

Me too. But wow, did that thing kick!
Tommydogg

quote:
Originally posted by bendable:
for those florida moose

Got to have something for the jetski in case of breaching great white sharks!

YooperSigs
I used only the 300gr. loads in the Number 3.
I bought a PAST recoil pad and embraced the thump.
Oh... many of my shooting companions maligned the little thumper until I produced a 3 round group that you could cover with a 50 cent piece at 100 yards.