SIG P320 is my manual-safety Carry version but with an X-Carry frame (much improved). SIGLITE night sights, no mods, 9mm as well.

I keep thinking I'll find something to dethrone the P320 from the most-accurate-and-easy-to-shoot-for-me category, and for a second I thought the HK would do it. Still kinda do, but with qualifications...

VP9 still gets no slide lock if I don't watch my right thumb. VP9 stings my finger under recoil thanks to those tacti-cool grooves in the bottom of the finger guard. VP9 has 2 less rounds available, but is less "chunky" than the P320 Carry.

The VP9 grip is very nice...running a small back with medium sides, but it still twists a bit in my hand under recoil whereas the P320 with the X-Carry frame recoils straight back.

P320 is my current #1. Stupid accurate and soft shooting.

Slow fire, 25 rounds out of each on separate targets from 15':

Okay, so the P320 is slightly more accurate. Granted, this is a swing by the range after a 10hr night shift, but that's no excuse. Once I got to round 50 I realized I was probably dehydrated. Whatever...a round every two seconds or so was the pace as the goal was "reasonable" accuracy.

So big deal, how do they compare with each other when driven hard? Used the same targets and put 25 more through each. Pace was about two shots per second, on average, again from 15':

Eeeeeenteresting. The P320 started (in my hands) to fall apart more in terms of grouping. SIG group was ~4" and the HK was ~3". What's more, the HK seemed to actually be "better" when driven hard. Didn't seem to notice the trigger guard groove "sting", didn't seem to torque as much as it did during slow fire, and the sights seemed to get back on target sooner and easier.

I dunno...I'm no Jerry Jones, so I can't tell you the what and why of this all, but what I can say is I'm no longer going to list the VP9 for sale. Not that I'm enthused at figuring out how to smooth down the trigger guard groove, but in fairness I had to Dremmel out the safety notch on the X-Carry frame, so I'd say they're even.

Now my question is: What does the contemporary, ".40 S&W" recoil spring that they're now using in both models do for the VP9? I'm curious...

sprg03-A3
I have both the VP9 & VP9SK in 9mm, bought new within the past 6 months, so they have the latest recoil springs. I find them both very accurate and extremely ergonomic. Have had no issues with slide locking open on an empty mag even though I didn't 'break in' with stronger ammo.
drtenb330
I've also gone back & forth between a 320FS and VP9 for a while. VP9 carry's better (a mild +), but the 320 is a tack driver, little recoil, and is used for competition (regular P320 FS which has been played w/: GG curved trigger, internals, Springer tungsten rod, spring, X5 grip with the full weight, no mag tunnel - and I will admit to having a 320 addiction: all the X5 320 models including the FS, Compact, Carry, even the VTAC, FS & C 45 )

Yet, for regular carry - I still end up carrying the VP9 much more- I went through the same experience. For rapid drawing, shooting it just comes out of the holster & shoots better. Probably just fits better

Another issue - I had the rear striker slide panel crack (used good-grade commercial ammo, but was probably ammo, not Sig), and I just can't get comfortable that it won't happen again.

Nice groupings!
BB61
You left some of the orange on the targets ...

(nice shooting). Do you think the ability to adjust the sides panels to fit your hand helped with the VP9’s accuracy over the session?


RichardC
Were those targets shot free standing or bench rested?


dehughes
Targets were shot standing @15' at an indoor range.

Not sure if the side panels made the difference, but they do feel good in hand.

When I had the P30/P30L combo, I ran small backstraps with large side panels. For some reason I'm gravitating to a small backstrap and medium side panels on the VP9. I'll tinker with the grip panels some more in the coming week or so.

I think the HK "luminescent" sights are easier to pick up than either the HK stock night sights (Meprolights) or the SIGLITEs. Maybe that's part of it?

My P30/P30L stung my finger as well, but then I heard Vickers say the VP9 didn't sting his fingers like the P30 series did so I had hope. Thing is, if I end up keeping the HK I'll have to get that trigger guard groove dealt with.

I'm about halfway between Grayguns and Lazy Wolf Guns, so at least I have options.

cslinger
Well from at least 15’ I don’t think it makes a practical iota of difference. Either or and your bad guy is having a really bad day.

pepsiblue
I'm glad I'm not the only one that's getting bit by the groove in the bottom of the trigger guard! Pretty sure I'm going to break out the Dremel!!

When someone tries to kill you, it doesn't matter how they are doing it. You're in mortal danger, and it's time to try to kill them back.

Kill every last one of these goddamned animals. We need a president with balls. We need leadership. We should be carpet bombing these barbarians wherever we find them, and we should be looking for them 24/7. We have to unleash Hell upon them. They understand nothing but death, so death is what we should bring them, wholesale.... Para

I left "practical" behind many years ago. It was covered with my first Glock 19. (Fredward) 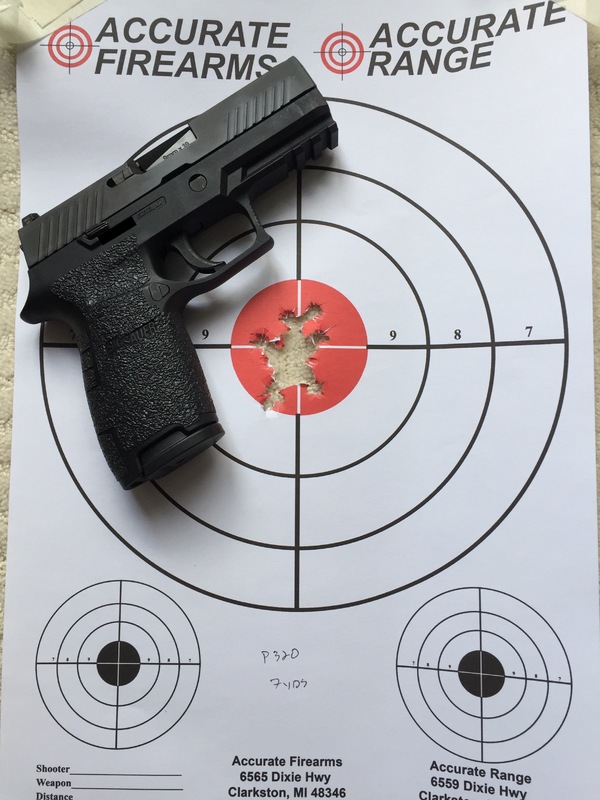 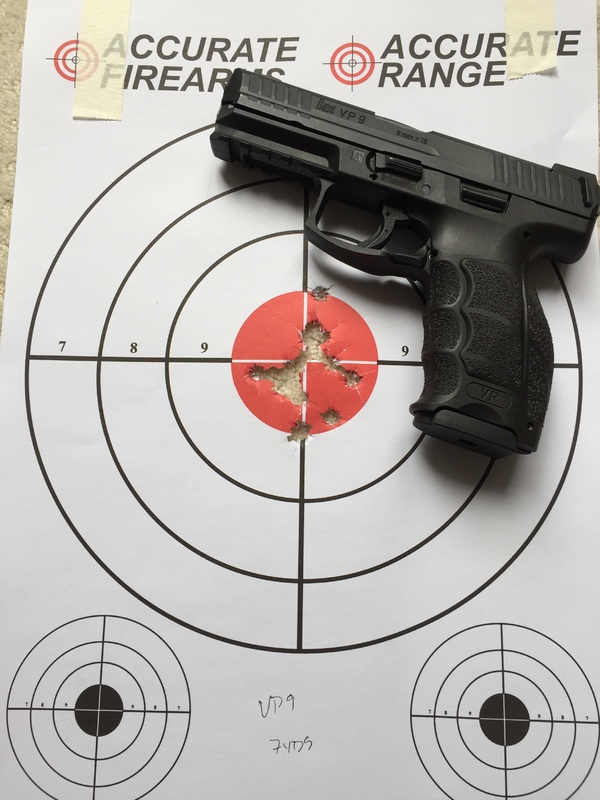 Slow fire, they’re both great. And I also find the VP9 “yaws” under recoil. So under rapid fire, I string up and to the right. But the P320 is a more predictable rise and fall.

So for me, the P320 shoots better, has a preferable mag release, a better trigger and in Carry has 2 more capacity.

I wanted to love the VP9. I only just like it okay. I won’t carry it just in case I want to sell it. But the prices dropped so far, I can’t bring myself to sell.

Slow fire, they’re both great. And I also find the VP9 “yaws” under recoil. So under rapid fire, I string up and to the right. But the P320 is a more predictable rise and fall.

So for me, the P320 shoots better, has a preferable mag release, a better trigger and in Carry has 2 more capacity.

I wanted to love the VP9. I only just like it okay. I won’t carry it just in case I want to sell it. But the prices dropped so far, I can’t bring myself to sell.


JonFrost
I have 2 vp9's, 2 320x5's and 2 full size 320's. And many, many more HK's and SIG's. I am a fan boy of both. I pretty much only shoot uspsa and find that for me they are both about the same, but the 320's I seem to shoot a little faster in competition. However, I prefer the paddle release and love the grips on the vp9. Both are great pistols. Great shooting!!


dehughes
Yes, "yaw". That's a great way to describe how the VP9 moves under recoil.

Super cool, BuddyChrist, how your groups are very similar in terms of P320 vs. VP9 as what I discovered. Both are accurate, but there is a slight difference with the scales tipped toward the P320.

I see you're using, what appears to be at least, the large backstrap and large side panels on the VP9?

BuddyChryst
Yeah I have XL hands. The P320 is a large grip module and actually now wears a Hogue wrap in addition to the Talons: 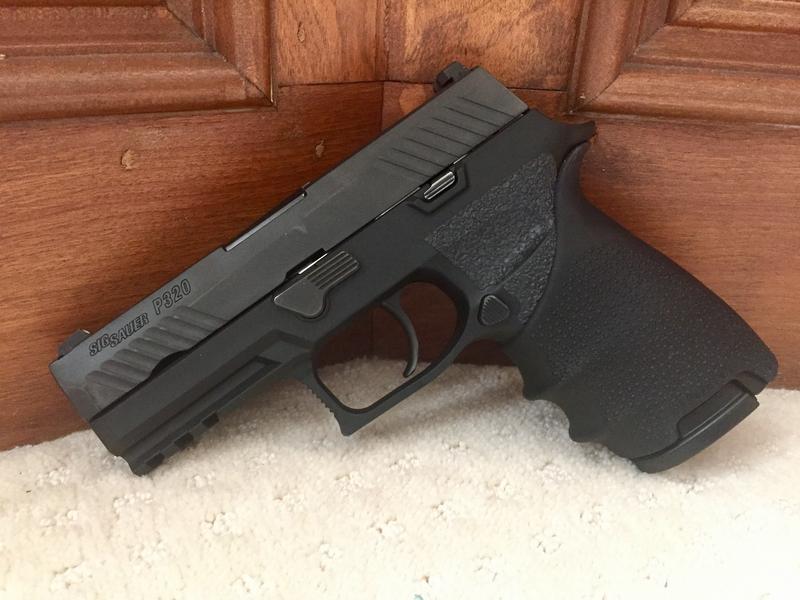 dehughes
Does your VP9 have the older "red" spring, or the newer "silver" spring?

TENWOLVES
With either my VP9 or P30SK, on my shooting hand which is my left hand, I use the large side panel on the left side and small panel on my right, with the medium back, this fills my palm and gives me much better control over all in all conditions..

quote:
Originally posted by TENWOLVES:
With either my VP9 or P30SK, on my shooting hand which is my left hand, I use the large side panel on the left side and small panel on my right, with the medium back, this fills my palm and gives me much better control over all in all conditions..

Did you do this to correct shooting consistently right or left?


TENWOLVES
Not really,a special forces friend of mine turned me on to this, and it improved my shooting skills quite a bit, bottom line we all need to craft our grip the best way possible for our hand size and finger length, thegrip panels HK provides are excellent.

quote:
Originally posted by dehughes:
Targets were shot standing @15' at an indoor range.

dehughes
Mitigated the "yaw" of the HK, as well as greatly reduced if not removed the trigger guard groove "bite", all by installing Large side panels and the Medium back strap. Was running medium sides with the small back.

The gun now recoils pretty much straight back/up, instead of twisting to the right under recoil. It definitely sits in the hand differently than the P30 series.

The HK is very easy to shoot rapid strings with. Compared it to a Gen 5 Glock 17 w/TLR-1, and the HK was *for me* easier to shoot faster and with greater accuracy.