SIGforum
P239 conversion to 9mm
This topic can be found at:
http://sigforum.com/eve/forums/a/tpc/f/430601935/m/9790038674
dwd1985
P239 conversion to 9mm
I’ve read around the internet but looking for confirmation...is it true that the P239 can be converted to 9mm (from .40) just by dropping in a barrel and recoil spring? I do see that, unlike other classic P series pistols, the locking block is the same for 9mm/.40/.357 meaning that the slide should be identical between all 3 calibers as well.

https://www.topgunsupply.com/s...ing-insert-p239.html
sigfreund
It has been reported many times here that a factory 9mm barrel can be used in a P239 357/40 slide without modification to use 9mm ammunition. I don’t recall, though, if 9mm magazines are recommended.

In general, though, SIG pistol slides are not the same for 9mm and 357/40. The latter are usually heavier, evidently to slow slide velocity with the more powerful cartridges, and that is true of the P239 as well. That does not mean, though, that conversions don’t work.

As an aside, though, the locking inserts of 9mm and 357/40 P226 pistols are also both the same. In the Classic line pistols, the inserts do differ in the P229. When it comes to compatibility, it’s the barrels and locking inserts that must match, not the slides.

To argue with a man who has renounced his reason is like giving medicine to the dead.
— Thomas Paine

However, when Factory 9mm Threaded barrels went on sale for under $100 6 or 7 years ago, I bought one.

In over 1500 flawless rounds of which 75%+ were suppressed, only the barrel was changed, no spring change, no magazine change

I have never personally tried it wit a 40 magazine, but those who have all reported proper performance

The 9MM slide is not identical to the 357/40 slide, but the differences have not altered reliability

inspcalahan
I have a factory .357sig P239. I bought a factory Sig P239 threaded 9mm barrel and a few 9mm magazines. It shoots 100% suppressed and unsuppressed.

I tried it based on what I'd learned on this forum over the years.

That's even better if you can just use the .357 magazines, although I've not tried that just out of simply not thinking about experimenting with it, since finding 9mm magazines nowadays is only slightly cheaper than buying gold bars.

I've always had a P239 in the pile. Just a fantastic pistol. It's funny that when the P239 was a dime a dozen, most gave it mediocre praise. Now that it's been pushed out the door, it's one of the "must have" pistols. I suppose that's to be expected.
dsiets
I did a semi-fit 9mm barsto conversion barrel that did need some fitting.
Same recoil spring and .40 mags have been perfect for about 250 rnds of plinkers and a few mags of hp.
I am about due for a new recoil spring which has me wondering about 115 gr. range ammo working and if it doesn't, I'll keep the used spring w/ it just in case. But I may be wondering about nothing.

ETA: And just to emphasize-

quote:
Originally posted by colt_saa:
The 9MM slide is not identical to the 357/40 slide, but the differences have not altered reliability

This message has been edited. Last edited by: dsiets,
odin
I also did the Barsto, semi-fit conversion barrel from .40S&W to 9mm. It took a lot of the gunsmith's time to get the Barsto barrel to lock up. Time=money! He suggested a Lake City (???) barrel conversion that would have been easier. Using the .40S&W mags for 9mm didn't cause any problems....
Just Plain Cliff
I have two P239 SASs, both chambered in .357 SIG. After buying the first P239, I thought it might be fun to get a 9mm barrel and recoil spring for it. After shooting 9mm through the gun a couple of times, I sold the 9mm barrel and recoil spring; nowhere near as much fun as shooting the .357 SIG rounds. 9mm (for me) was just "meh!"

Excam_Man
Dropped in an OEM barrel in mine and it ran just fine.
If you limp wrist, you'll want to change the recoil spring as well.


pulicords
My P239 started out as a .357 Sig, then I converted it to .40 S&W because the later was authorized by my employer (PD) and the former wasn't. Later, I picked up a 9mm barrel and recoil spring system. The gun functions perfectly using either .357 Sig or .40 S&W magazines, shooting more accurately with 9mm ammo than either of the earlier alliterations. Although I rarely carry this pistol, having it available and with these options certainly makes it worth keeping. 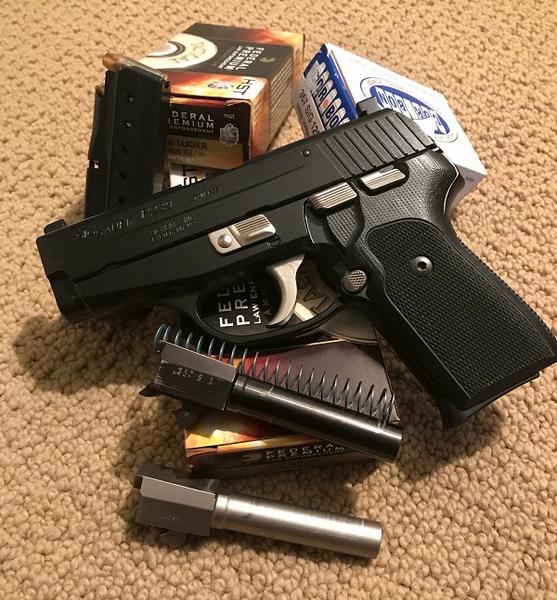 "I'm not fluent in the language of violence, but I know enough to get around in places where it's spoken."

What I like of course about this option is using 9mm for practice and 357 Sig for carry. 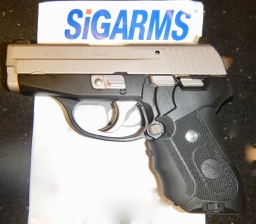 dwd1985
Thanks for all who responded. I picked up my P239 from the FFL recently, and had also bought the 9mm barrel from CDNN. Dropped the 9mm barrel in (it was a very tight fit) but it did fit and manually function just fine. I also bought some 9mm recoil springs so once I get it out shooting I will play with both and see if they're needed.
Prefontaine
OEM 9mm barrel.
OEM 9mm spring.
OEM 9mm magz.

Thousands of rounds and never had a stoppage. Swapping barrels and springs, at the range, I did manage to eject the spring out onto the range on several occasions.

I don’t want no teenage queen. I just want my M14. If I die in the combat zone, box me and ship me home. Pin my medals upon chest. Tell my mom I done my best.

quote:
Originally posted by dwd1985:
Thanks for all who responded. I picked up my P239 from the FFL recently, and had also bought the 9mm barrel from CDNN. Dropped the 9mm barrel in (it was a very tight fit) but it did fit and manually function just fine. I also bought some 9mm recoil springs so once I get it out shooting I will play with both and see if they're needed.

I think the thing you want to find out is whether the pistol will work in 9mm with the .40/.357 spring. Before you buy any more 9mm springs pick up a new .40/.357 spring and give it a try. If it works (and mine does) then you just have to stock one kind of spare recoil spring for all three calibers.