I've done some research that shows the early Romeo 1s had problems but I can't find much on newer units.
Phred
The RMR is going to be more rugged and is a better choice for duty use.
ksss
I have been carrying a First Gen RMR 06 on duty on a FNX .45T for 4 years now. I have not had any problems, but I would say if you go with the Romeo I would get the shield. The hood on my RMR looks like I have been pounding nails with it, and I have not. Just the everyday abuse that the RMR is subject to during duty use. I don't have any first hand experience with the Romeo.
bcjwriter
Before you decide, see Aaron Cowen’s videos with Sage Dynamics. He’s tested lots of RDS systems and really likes the RMR.

A lot of the rds' he tests fail the drop test, primarily due to the shape (and material) of the glass surround.

10-7 leo
I would avoid the Romeo1 for one reason, the motac feature is very sensitive. With mine, just walking is enough movement to keep it on. You will probably go through a lot of batteries.


Sic Semper Tyrannis
If you beat your swords into plowshares, you will become farmers for those who didn't!
Political Correctness is fascism pretending to be Manners-George Carlin

He has quite a few red dot videos worth watching

He has quite a few red dot videos worth watching

Thanks for bringing this guy to my attention. I've watched a couple of his videos so far and he does a good job.

I guess if I have to ask the question I already know the answer. RMR it is.
jljones
If you intend, in the line of duty, to use your pistol as a hammer repeatedly, get the RMR. If not, the SIG will do just fine.

There’s a point in time where these “torture” videos become a wee bit silly. I like how the RMR fans have already turned on the SRO as being “competition only” despite the fact I would get that it would a damn fine duty optic.


Blume9mm
My only experience is with the Sig Romeo 1 on a 320 and not for duty use but just fun.... personally I'm old school and would never rely on my life with a battery in anything.... regardless of the make and model. Don't know about the other one but the one advantage to the Romeo sight on my Sig is you can still use the iron sights.... regardless of if the red dot is working or not.
dehughes
Aimpoint ACRO. Sealed sight, less potential issues r.e. occlusion, fogging, projected dot, etc.. It’s the first pistol mounted optic I’ve seen that I’d genuinely consider for duty use.

Anubismp
The rmr is the toughest through a multitude of testing if I aggregate everything I've read and seen. I have a gen 1 rm06 and actually prefer the holosun 507c mostly due to the reticle. It's what I run on my current non summer carry. Ill likely run it as a summer carry once I get another 19 frame to chop. Check out the tests on Sage as I think they are worth a watch as folks have already mentioned. If I was buying for duty and wanted the absolute best I'd go.
1. Rmr gen 2 then gen 1.
2. Holosun 507c
3. I'd check out the acro or dpp. The 507 did similar to the acro but is half the price and has an eotech reticle I like for speed. YMMV.
Berg
I had an RMR on a Sig and didn't like it. Trying to identify a target/threat while looking through a purple tinted lens was too much for my eyeball and brain. 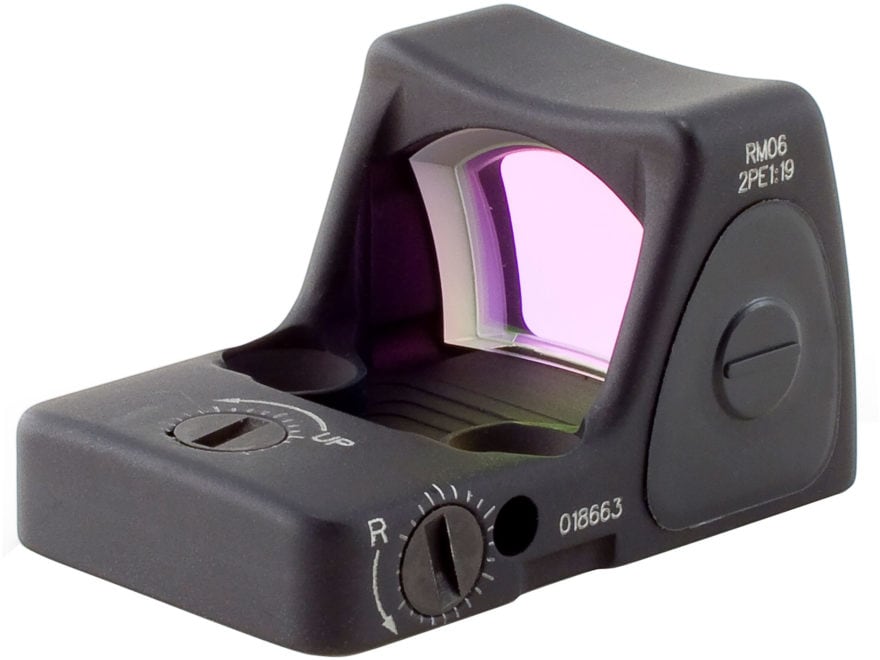 Alma
The Romeo1 is durable enough for duty use and is being issued by some Departments.
For duty you should add the Romeo1 Shroud for added ruggedness.
WARPIG602

quote:
Originally posted by Alma:
The Romeo1 is durable enough for duty use and is being issued by some Departments.
For duty you should add the Romeo1 Shroud for added ruggedness.

Which departments are issuing it?

Full disclosure: I’m not Leo...I do carry every day

I have experienced no change in zero

I do not drop my guns intentionally. That said, I do carry off body a lot because I am in gym shorts a ton and I don’t like the on body carry options for a full size gun with a red dot. The gun is contained in a kydex holster in the bag, but the bag still gets dropped and tossed about as any bag would...no zero or damage issues

I have watched Aaron’s video on the acro. I agree with him that the adjustment screws could give more tactile feedback

The big knock on acro thus far has been battery life. I did have one battery die after about 3 months of continual on. I replaced the one dollar battery easily since it has a side battery compartment, and shot it with, again, no zero issues. In this instance trijicon appears to have Aimpoint on battery life. But not having to remove and rezero the optic to replace the battery still gives Aimpoint the win. I do absolutely pick up the dot on the acro faster and more clearly than n rmr. For the original red dot sights I liked the delta point pro better than the rmr.

If the meek will inherit the earth, what will happen to us tigers?

hrcjon
While Aimpoint has an terrific track record the ACRO is new and so I think falls in the same category as the Romeo 1 for serious use. Not enough time in the field to tell.

4ftty4
There are about a dozen guys in my agency carrying the Romeo on duty, both for patrol and SWAT stuff. Most have put the shroud in, some have not. Only issue I have heard of or seen is burning through batteries due to constant movement.
venenoindy
In my opinion there is no contest, Trijicon RMR all the way. I was looking for a pistol red dot and I looked at several different brands, I wanted the Aimpoint Acro but not really available and over $600.00 I had to pass for the moment. I even looked at the Trijicon SRO and still pick up the RMR type 2. Today was my first time on my G17 gen 5 and couldn't be happier with my choice, it may not be perfect but I'm confident that will serve me well and I made a great choice.
dgb2324
I run a Romeo on my duty gun with no issues whatsoever. I just milled a slide to run a trijicon on a sub compact slide.