Ogie
I sometimes carry my Colt Night Cobra in an Alessi Talon holster and I really like it. It carries well and shoots great with a really nice trigger.
WARPIG602
I'll occasionally grab my 340PD with CT grips. Makes a nice winter coat pocket gun.

mbinky
If I carry a revolver it is a Smith 442 and it's a backup in an ankel holster.

I have thought about getting a good belt holster for my 686-4 2.5" or 64-2 2" just as sort of a "Sunday gun" and because I actually shoot them so good, especially one handed. For one reason or another I can shoot a revolver (double action) one handed way better than I can shoot an automatic one handed.
mlazarus
Only on a rare occasion. Kimber K6S.

Clowns to the left of me, Jokers to the right ♫♫♫

Cookster
I have a S&W 442 and occasionally pocket carry it. I also have a 640 Centennial in .357 (carry IWB) and because of its slightly larger size and heft is easier to shoot accurately. The trigger's on both are pretty damned heavy.

I have heard and read that the Ruger LCR pistols are nice, with their trigger's being somewhat better that the S&W snubbies.

I will also say that it took me a bit of practice to learn to shoot the 442 accurately. If you have not shot a lightweight snubbie before, maybe try one if you can before you buy one.

RobThis message has been edited. Last edited by: Cookster,

henryarnaud
Until last year I carried a 642-1, an airweight J-frame, whenever possible. A Beretta PX4 Compact has pretty much been my EDC since then, but I still carry the 642-1 as a BUG or sometimes as my only gun.

I like the 642-1 because it's versatile since I can carry it IWB, in a pocket holster, or in an ankle holster. Mine's been reliable so far. I can shoot it reasonably well with defensive ammo. And it's not too expensive.

If you prefer a dark color gun, the 442-1 is the same but with a blued finish. I prefer the 642-1 because it requires a bit less in the way of rust preventive maintenance.

You could also get the 638. It's an airweight J-frame with a shrouded hammer, meaning one can access the hammer via a "button" and cock it for SA firing. Some people like that option, but I don't see at as necessary on a defensive gun. The all-steel version is the 649. I've always wanted to get one and have it converted to DAO, as I like being able to put my thumb on the hammer while holstering, which is not an option on the Centennial guns (642, 442, 640, etc.). It also makes it easier to check for high primers.

From what I've read the Kimber would be a very good option for someone wanting a J-frame size gun with a 6-round capacity. I've been tempted to get one. Since it's all stainless steel, I see it being limited to belt carry, maybe shoulder carry if one is so inclined. I see the 640 being similarly limited. However, some people say they pocket and/or ankle carry these guns, so that may be an option for you.

The Ruger SP101 may be an option, but it is quite a stout gun, built like a tank. If you plan on running a steady diet of .357 Magnum ammo it's probably your best bet. I've heard of people pocket and ankle carrying this gun, but for me I'd only carry it in a belt holster with a sturdy belt because of its size and weight.

I don't know anything about the current crop of Colt revolvers.

ETA: I've also carried 2" and 3" K-frames quite regularly, which is pretty easy to do with a good holster and belt, but the OP seemed more interested in compact revolvers.


"It is a capital mistake to theorize before one has data. Insensibly one begins to twist facts to suit theories, instead of theories to suit facts." Sherlock Holmes

quote:
Originally posted by Cookster:
I have heard and read that the Ruger LCR pistols are nice, with their trigger's being somewhat better that the S&W snubbies.

The LCR is a good option, but after dry-firing one I passed and went with a J-frame because the LCR's trigger, while light and smooth, didn't have much "oomph" on the trigger reset. I like a strong trigger reset when doing quick DA shooting. I saw the LCR trigger as having a higher likelihood of short-stroking the trigger when firing quickly.

But that may not apply to you.

As with any kind of gun purchase, it's best if you can try before you buy.


"It is a capital mistake to theorize before one has data. Insensibly one begins to twist facts to suit theories, instead of theories to suit facts." Sherlock Holmes

It used to be my BUG, but these days it is mostly my primary sidearm

Today I was carrying one of my PC 940 Specials Yes it was the one with the shamrock grips

Bigboreshooter
I carry my 637-PC from time to time. 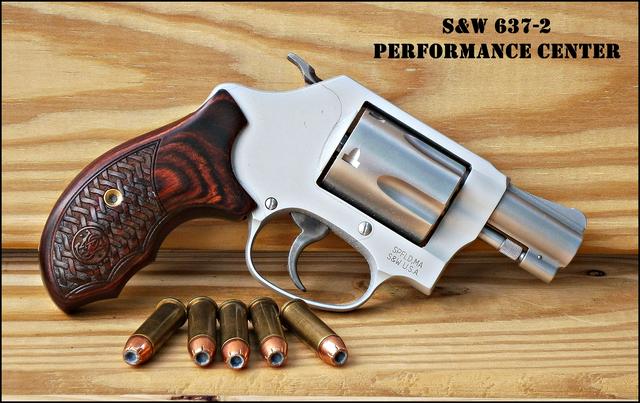 
PCWyoming
I have been know to carry a 642-1 IWB while shopping, etc.

PC
TENWOLVES
I carry my Kimber K6S MICRO, and K6S 3"HAMMERED, as well as my S&W 640 PRO, during the colder weather months I will carry my S&W 686 plus 3", great guns and make reliable concealed EDC guns for different occasions...

Belwolf
I pocket carry a S&W Model 38-2 (occasionally swapping it with a Colt Det Spec 2nd series) when in shorts and sandals, which is quite often given my locale.

I've gone back to these after trying a few pocket autos (LCP, LC9, G42 and Sig 238), I shoot the small revolvers more accurately.


“Posterity! You will never know how much it cost the present Generation to preserve your Freedom! I hope you will make good use of it. If you do not, I shall repent in Heaven, that I ever took half the Pains to preserve it.”
― John Adams

"Fire can be our friend; whether it's toasting marshmallows, or raining down on Charlie."
- Principal Skinner.

VictimNoMore
Pretty much every day (or part of the day), I have a revolver as my primary weapon.
The LCR in .327 Federal Magnum is hard to beat, for me. Six shots of hot .327 that is pocketable. Two speed strips gives me 18 rounds, total.
When the wife and I run (2-3x a week), the LCR rides in a Smart-Carry-like holster that I bought from the NRA Store. Very secure and stable.
When I can't have a gun, I carry my S&W 351c, 7 shots of .22 Magnum Gold Dots in it, in my pocket.
A Sig P365 is my choice, the rest of the time.
Tommydogg
Sometimes my SP101. On that rare day where it gets cold enough I carry a S&W Pro Comp V8 under a jacket!

rburg
Man guilty. I've carried my 337 Smith since I bought it back in 1997. Its just a great little gun. Its so light you barely know its back there. I carry it in a Galco SOB holster that maybe weighs nearly as much as the gun. I've got a laser aim grip on it, and that pretty much covers the bases.

Of course I don't get myself in situations that require me to shoot more than 5 bad guys. I'm amused at guys who carry 15 round magazines and 2 extras, just in case. Bet they never need their gun, either.

the Hudge
My S&W 342 Airlight Ti is my constant companion, and has been for at least 15 years.
abnmacv
Once in a while a J-frame which does make a nice pocket pistol. Doesn't get much carry time anymore.

Marcushoss
I have a S&W 642 that gets carried as a second every day. I have a 625 that I carry on occasion because it makes me happy. I also have a Trooper MK3 that I am fond of that gets carried once in a while. I have some very nice, new, modern guns that I carry and have to carry a Glock at work, but I still like my revolvers. I bought a new Cobra a while back, have not gotten around to shooting it yet, but it looks nice, feels nice and has a nice action, so, unless it is a dog at the range, sooner or later, I'll carry it too.