SIGforum
P320 Newbie Question
This topic can be found at:
http://sigforum.com/eve/forums/a/tpc/f/430601935/m/8220018044
XCRunner200U
P320 Newbie Question
Hey everyone, Ive unfortunately been out of the loop for a while and have lost touch a little bit with some of the changes recently.
I stopped at the lgs earlier this week and saw the p320 x carry. Man what a nice feeling gun. I was never a huge fan of the way the 320 felt but this was a major improvement. I also really enjoyed the flat trigger that broke at 90degs.
I am a big fan of 357sig and it is my preferred carry round. My qestion is what is the best way to get a xcarry frame and trigger with a red dot 357sig slide? I know grayguns has a flat trigger but is there anyway to get the 90deg break?
One more, has anyone used the romeo one with the 357sig? Does it hold up the stronger recoil impulse?

Runner
sigfreund
I can’t answer most of your questions, but the 357 SIG cartridge has no stronger recoil pulse than many 40 S&W loads (the guns use the same recoil springs for that reason), and less than most 45 ACP loads. To get comparison figures for the three cartridges, multiply their weight in grains by muzzle velocity (and divide by 1000 if you want to get more manageable figures). Those values (that are referred to as Power Factors) obviously vary with different loads, but here are some for typical loads from P226s and P220s:

The 357 SIG recoil may feel somewhat different (“snappier” is how many people describe it), but the momentum of the projectile as revealed by the Power Factor calculation is what affects the slide velocity and things like mounts on the slide.

dc54
Getting a factory red dot slide not in 9mm will be the problem. Jagerwurks will mill a 357 Sig slide for your red dot. Add the x grip frame and a GGI Trigger and you’ll have what you want.

XCRunner200U
Fair points about the power factors being the similar. Do you know of the romeo 1 holds up to the increased velocities compared to the 9mm. I mean is there a reason besides lack of sales that sig doesn't offer the rx in anything other than 9mm?

Thats kinda what im thinking ill end up doing. Does the gray guns trigger make it a 90deg break or is it just a flat trigger replacement?

Runner
dry-fly
I’m sorta doing the same type of thing. Here’s what I’ve done: bought an FDE P320 Compact in 9mm, put in an Apex trigger and an X Carry grip.. which feels awesome in hand btw. I’m a .357Sig nut as well but haven’t obtained a caliber x change kit just yet. When I make up my mind which to get milled (the 9mm slide I have or a .357 slide I’m looking for).. I’ll then send that to Jager Works. I figure if I’m going to go through that much trouble I’ll just go all out and put a Trijicon RMR on. 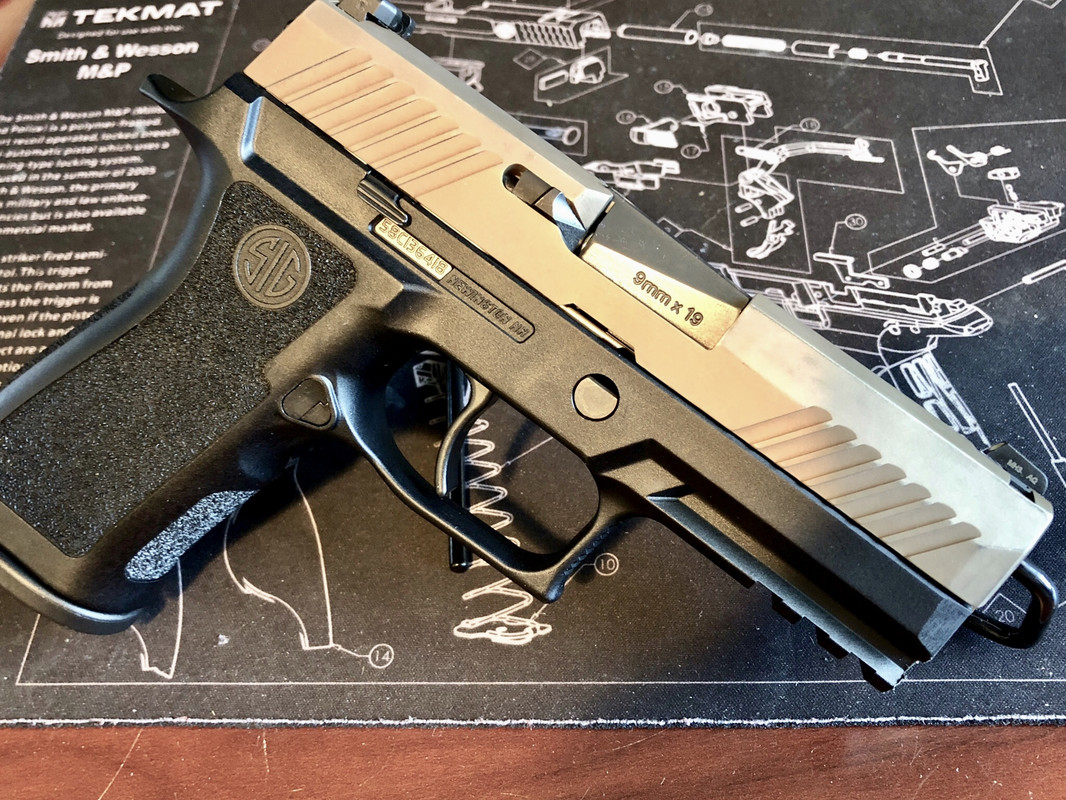 "Attack life, it's going to kill you anyway." Steve McQueen...

XCRunner200U
Good looking gun. Its always nice to run into another 357sig lover. I really enjoy it in my p229 sas.
Sounds like what you have done is about the only way to do it. (Though i have concerns about doing trigger jobs on carry guns, but thats a different subject)
It would be so much easier if they just offered the xcarry in more than just 9mm lol.

Runner
dc54
The GGI Trigger in the X Grip does break close to 90. Side by side with an X Carry, the only difference is accuracy at distance. Within 50 ft, not much difference. There may be something to the pre-tensioned barrel, but at most fighting distances it’s not noticeable.

quote:
Originally posted by sigfreund:
the momentum of the projectile as revealed by the Power Factor calculation is what affects the slide velocity and things like mounts on the slide.

I'm probably missing something here, but dredging back to high school and basic college physics, my first thought would be that we should be looking at energy, rather than momentum (Power Factor).

I'm probably missing something, but I don't see what I'm missing. Of course if I did see it, I wouldn't be missing it.

sigfreund
Momentum v. kinetic energy?
But first a caveat: If any real (real) physicists wish to correct or amplify any of this, please do. What I know is what I’ve been told and have seen for myself, but I don’t have the formal education on the subject to explain it from that standpoint.

Years ago when metallic silhouette shooting was more popular, an American Rifleman article explained that projectile momentum was the force that moved stuff, and therefore did things like knocking over steel targets. That’s also why bowling pin shooters like bullets with lots of momentum, e.g., the 45 rather than the 9mm. As Bryan Litz discusses in his book Applied Ballistics for Long-Range Shooting, momentum affects how well a projectile penetrates into a game animal. As already stated, momentum varies directly with mass and velocity. Kinetic energy varies directly with mass, but also with the square of the velocity, and is what produces effects like cavitation in tissue and hydrostatic shock. Both momentum and KE are therefore important for hunting (and self-defense) bullets.

Other than knocking things like steel plates or bowling pins over, another type of movement that projectile momentum causes is recoil. That’s why most (if not all) formulas for calculating rifle recoil use direct projectile mass and velocity rather than velocity squared. As for Power Factor (PF), I cite it in these discussions because although it doesn’t produce the momentum results that a physics text would ask for, all we need to know are the readily-available mass in grains and velocity in feet per second for easy comparison purposes. Why PF was chosen in the early days of “action” shooting to differentiate between so-called minor and major cartridges, I can’t be absolutely certain. I’m pretty sure, though, it was to ensure that the 45 ACP cartridge would remain the cock of the walk. PF keeps velocity from becoming too important for fans of big, slow-moving bullets.

But what about actual results and the question of how momentum affects slide velocity and how shooting batters a handgun? This is where I’m most confident in my beliefs because it’s something I observe in one range session after another. If the stainless steel slides of a 357/40 P226 and a P220 weigh about the same (within ~1 ounce or <10%) and they all use the same recoil springs, what’s left to influence how far fired cases are ejected from the gun?

At 1400 fps from a P226, the kinetic energy of a 357 SIG load is about 544 ft-lb; the KE of the hot Gold Dot 200 grain +P 45 ACP load is about 499 ft-lb. On the other hand, the Power Factor of the 357 load is 175; the PF of the +P Gold Dot is 212, or >20% greater. Which one produces the higher slide velocity and therefore ejects the fired cases farther?
Fired 9mm training ammo cases from a P226 dribble out a few feet from the shooter; fired 357 226 cases end up about 3-4 yards from the shooter; fired 200 grain +P Gold Dot cases strike the ground 9 yards (27 feet!) from the shooter. Part of that may be due to the slightly lighter P220 slide, but over twice the distance‽ Not in my belief, and that’s why I’m confident that projectile momentum is what affects slide velocity the most, and therefore is a better predictor of felt recoil and its effect on the pistol.*

* And while I wouldn’t presume to ask Bruce Gray to support me directly on this, I will point out that in discussions about what ammunition is suitable for regular use in 10mm P220 pistols to avoid shortening their service life, he refers to Power Factor as a useful evaluation criterion.