Any reason not to use it with my Sig P365XL or Sig P320-M17? I assume the M17 should be fine since the military uses the M17 and NATO rounds, but wasn’t sure if the commercial variant is rated the same.

Any concerns with the P365XL and NATO rounds?

I didn’t see anything explicit in either manual saying it was OK or not OK.
Flash-LB
It'll work fine in your gun.
neil0311

Thanks! Is there really any “premature wear” when you use higher pressure ammo, or is that overblown unless you use thousands of rounds?

I only bought 500 rounds.
Flash-LB
Overblown unless you shoot thousands of rounds, which very few people do.
hjs157
For many years your question has been hotly debated with folks clearly anchored on one side or the other of the argument. Regardless of what the "experts" at the local gun shop or on the internet say, while loaded to higher pressures than standard 9mm NATO ammunition is not a +P rated load by SAAMI standards. Personally, I wouldn't think twice about using NATO 9mm in a P320 or P365, both of which If I recall correctly are rated for +P ammo.

9mm standard maximum pressure is 35,000 psi
124gr 9mm NATO maximum pressure is 36,500 psi
9mm +P maximum pressure is 38,500 psi
dking271
I shoot and have shot many thousands of 9mm nato ammo. Like others have said, it is not loaded to +p but is hotter than standard pressure. I have about 3500 rounds of Winchester Ranger 124gr nato that I used for tactical training courses up until last year. I felt it more closely replicated the ammo I use for self defense.

sigfreund
From the P320 and P365 manuals: “Always use ammunition that complies with the industry performance standards established by the Sporting Arms and Ammunition Manufacturers’ Institute, Inc. of the United States (SAAMI) or ammunition manufactured to military specifications.” [Emphasis added.]

Although I’ve seen no independent confirmation, I have long thought that the P320 and variants would be more tolerant of more powerful ammunition because they don’t have the full length aluminum frame rails of the Classic line pistols. It’s steel on steel, and although the slides differ, P320 receivers are all the same whether used in 9mm or 357/40 guns.

It’s slide velocity of the guns that puts the stress on the slide rails and receiver tabs, not chamber pressures per se. If I were concerned about using more powerful ammunition, I’d get a Grayguns recoil spring guide and use it with a more powerful 1911 recoil spring to slow down the cycling.

neil0311
Thanks for all the input. I assumed the M17 would be fine, since Sig makes it’s own line of “M17” ammo to NATO spec.
GT-40DOC
I purchase the 9mm NATO ammo by the case for two of my firearms that were designed for it. I would not use it in old firearms(i.e. P08 Lugers, P38s, etc) as they were not designed for it.
CharlieSW
I have had great success using the NATO rounds for break-in of my 9mm pistols.


Pragmatism: the relentless pursuit of seeing things as they really are.

V-Tail
This is recommended ammunition for the H&K P7, ¿si?

pasound
I currently have no 9mm NATO ammo left, but shot a lot of it through my S&W 6906, and my SCCY. Accurate, reliable, and not a problem in the Smith or SCCY. I would load it in my 365XL without a negative thought.

rock185
FWIW, I've used thousands of rounds of 9MM NATO in a variety of semi-auto pistols and revolvers over the last 20+ years, with no issues. I have used mostly Winchester Q4318, along with IMI, and some SIG and Federal 9MM NATO. I just ordered another manufactuer's 9MM NATO to try, but expect performance will be very similar to the NATO ammunition I've used for years.

In short, I would not hesitate to use actual 9MM NATO, bearing the cross in a circle NATO headstamp, in any of my 9MM firearms.....ymmv

quote:
Originally posted by GT-40DOC:
I purchase the 9mm NATO ammo by the case for two of my firearms that were designed for it. I would not use it in old firearms(i.e. P08 Lugers, P38s, etc) as they were not designed for it.

I am under the impression that the factory loaded ammo WAY back when the P08 was new is way hotter than any typical 9MM ammo sold today. 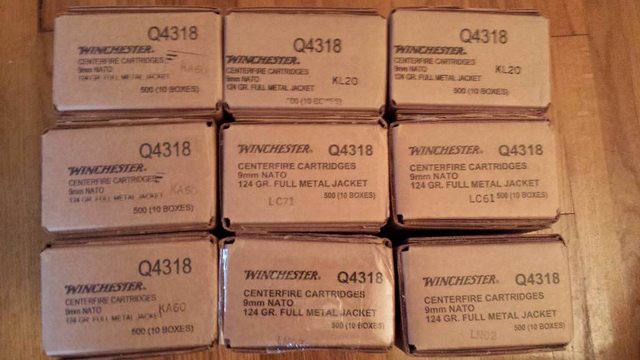 NRA Benefactor
I lost all my weapons in a boating, umm, accident.
http://www.aufamily.com/forums/

quote:
Originally posted by GT-40DOC:
I purchase the 9mm NATO ammo by the case for two of my firearms that were designed for it. I would not use it in old firearms(i.e. P08 Lugers, P38s, etc) as they were not designed for it.

I am under the impression that the factory loaded ammo WAY back when the P08 was new is way hotter than any typical 9MM ammo sold today.

This is a myth and totally untrue!! The original 9mm ammo designed by Georg Luger for his handguns was 123gr. truncated cone lead bullet with a velocity of 1050 FPS. Mr. Luger produced the cartridge that would function correctly in his handguns.

Note: The 9mm rounds for the Luger Carbine(long bbl. and shoulder stock) were of higher velocity in order for the long barrel and toggle train to function properly.
sigfreund

I have long wondered about the common 123 (or more usually 124) grain weight of 9mm Parabellum bullets and how close those weights are equivalent to the nice, round weight of 8.0 grams. Would the original bullet weight have been specified in grains or in grams? Grains are part of the “English” system of measurements whereas of course grams would have been the measurement in Germany at the time the cartridge was developed.

I think I know the answer to the question, but comments?

powermad
The new Winchester M1152 is pretty snappy with a 115 gn flat nose bullet, 1320 FPS.
It was about the same price as 9mm NATO so I picked up a case to try out.
Functioned well in my 365, seems a bit snappier than 9mm NATO
smschulz
I've always liked 9mm NATO.
I usually had to pay a premium for it but that is kind of irrelevant now days.