Any concerns about this stuff lasting forever? Anything to look out for? I imagine a swollen can or rust, but I don't know past that. What do y'all think?
cas
Tough to say, but probably just fine. Who, what, where and how play a big factor.

There are certain types of problematic surplus ammo in various calibers out there (Syrian 7.5x54, Pakistani .303, Indian 7.62x51, etc.), but I have yet to be made aware of any specific x54R ammo that has issues, other than various ammo that simply hasn't been stored properly. So provided the spam can is not rusty, you should have no problems. 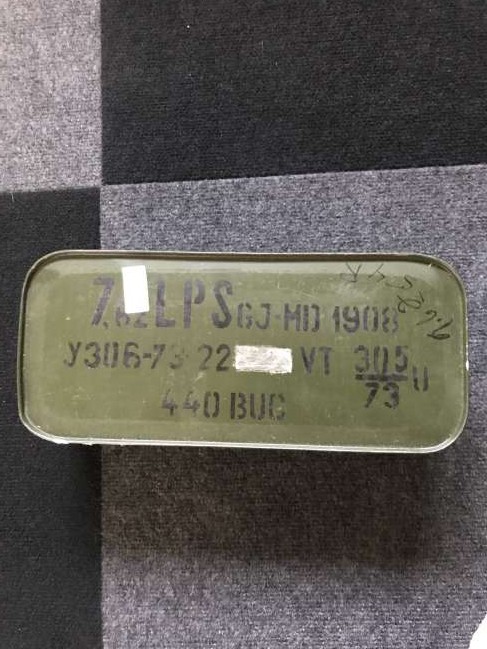 This is the image that was posted with the WTS ad. What can y'all tell me?
RogueJSK
440 rounds of Romanian surplus 148 gr. steel core light ball "silver tip" ammo, produced in 1973.
PASig
I think as long as it was sealed up, it's fine.

I had read that our forces were shooting off .50 caliber ammo in the sandbox that was produced during WWII!

rburg
Ammo is like milk, eggs, or bread. It has a shelf life of 2 weeks. Or maybe not. You can look in the business end, the one opposite the primer. If the bullet is gone, its no longer good. Except for painful reloading.

I used to love these threads because it gave me the opportunity to tell the poster to just send it to me for proper disposal. Probably not the best ammo to use for self defense because there is an outside chance it might not fire or be accurate. But I don't want anyone shooting at me with it.

I've been told some antibiotics get stronger with age. I've not heard of that with ammo. It might get weaker once past the century mark, and I don't think I'd trust black powder ammo very far. I don't know much about primers. I do know they didn't want to use non-corrosive primers for military use because the old corrosive were considered to last longer. Any body know if that's still true? Maybe the military just wanted something for the troops to do, like clean rifles.

So I guess we can summarize by saying if the bullet is still in the case and the primer isn't dented, its probably good as gold.

RHINOWSO
It's never too old for a Mosin.

quote:
Originally posted by honestlou:
A guy locally (individual, not a store) is selling cans for $110 each, and they appear to be 1973 vintage from the photo.

It's Xmas time and he likely needs Xmas money.
kz1000
I have a Soviet sealed case (2 spam cans) from 1948. I don't have any worries that the ammo has gone bad. Bought cheap & stacked deep when it was .10 a round.

maladat
I've shot a lot of ammunition, both rifle and shotgun, that sat in cardboard boxes in an un-climate-controlled garage in Houston since the 80's. Never had a problem with any of it.
RogueJSK

quote:
Originally posted by kz1000:
Bought cheap & stacked deep when it was .10 a round.

Ditto. Even after selling off most of my Mosin-Nagants and about half of my x54R stockpile a couple years back, I still probably have about 8k-10k rounds squirreled away.

I was buying one or two 880 round crates every month back in the mid/late 2000s, when it was like $80 shipped per crate.
steelcityfishanddive
That stuff is perfectly fine. I shoot it underwater in power heads. Great round for my purposes.